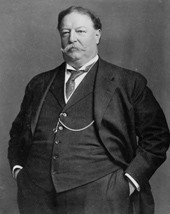 William Howard Taft was America’s heaviest president. He would have preferred being seen and remembered for something else, and took steps to lose weight. Taft’s story of weight loss and regain, described in today’s Annals of Internal Medicine, sounds completely familiar today, more than 100 years later.

Using correspondence and archival sources, Deborah Levine, an assistant professor at Providence College in Rhode Island, tells the story of Taft’s struggles with his weight.

In 1905, while serving as Secretary of War, Taft weighed 314 pounds. That’s a body-mass index of 40, which today would indicate someone who is severely obese. He knew his weight wasn’t healthy, causing an “acid stomach,” shortness of breath, problems sleeping, and daytime fatigue. A recommendation from his sister led Taft to Nathaniel Yorke-Davies, a British physician specializing in the medical management of obesity. It was an unusual move, since there were several highly popular diet gurus in the United States at the time, including John Harvey Kellogg.

At the time, Yorke-Davies was sounding an alarm about the dangers of obesity. He identified it as a cause of lung and heart problems, and premature death. One of his books, Foods for the Fat: A Treatise on Corpulency and a Dietary for its Cure, became quite popular.

At first, things went well. Taft lost 59 pounds between the beginning of December 1905 and April 1906. Taft was proud of his progress but seemed aware that it would be long struggle. According to one letter reviewed by Deborah Levine, Taft wrote his brother that “Everybody says I am looking very well, which indicates I suppose that I have a good color … but I am pretty continuously hungry.”

The success didn’t last. Three years later, when Taft was inaugurated as the nation’s 27th President, he tipped the scales at 354 pounds (a BMI of 45).

Despite his obesity, President Taft lived to age 73. By comparison, the average man born the same year as Taft (1857) was less than 45 years.

I suspect that President Taft had what we now call metabolically healthy obesity. People with this form of obesity don’t type 2 diabetes and have no greater risk of heart and blood vessel disease than people who aren’t obese.

His story and struggle with weight are much the same as the stories I hear from my patients today. They decide to lose weight, and find a diet that feels right. There’s an initial period of weight loss. But at some point, the pounds become harder and harder to shed. That’s often followed by a period of weight gain. Many people end up heavier than they were before dieting.

It’s a frustrating cycle that makes some people give up trying.

But it is possible to lose weight and keep it off. Since 1994, the National Weight Control Registry has been gathering information from more than 10,000 men and women who have lost weight and kept it off for years. One thing Registry researchers have learned is that everyone is different, and there’s no single sure-fire road to weight loss. But here are a few of the things they ‘ve learned from participants:

To these sensible changes, I’d add one more

One thing that has changed between 1909 and today is the number of Americans who are obese. During Taft’s time, obesity was relatively uncommon. Today, 36% of Americans are obese, including an alarming number of children. To reverse this unhealthy trend, we as a nation need to choose healthier diets and get more physical activity. And this should start in early childhood.