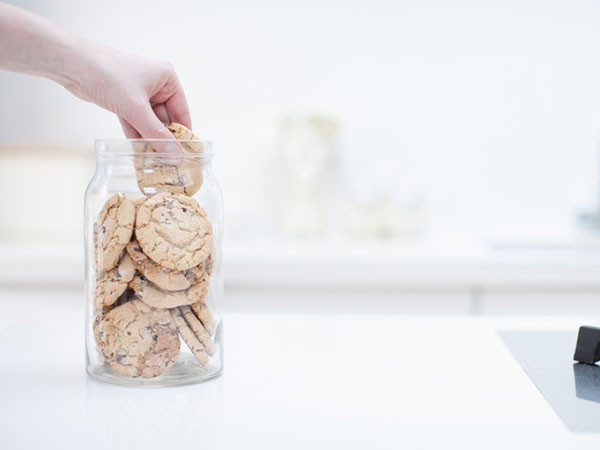 The challenge with resisting food is, well, the food. It tastes good. It looks good. It smells really good, and when we see everyone eating pizza, ice cream, and chips, we want in.

Then we eat too much and swear that we’ll do better, but when the next time comes…

We know that what we’re eating isn’t healthy, but no matter how hard we try, resisting feels impossible.

There’s good reason for that. We get food cues all the time, from the outside world and from inside our brains, and the message isn’t, "More kale chips." It’s an uphill battle, and it helps to understand that. It also helps to realize that saying no involves more than trying harder. "It’s not about willpower," says Kathy McManus, director of the department of nutrition at Brigham and Women’s Hospital. "It’s about developing skill sets."

It takes intention, awareness, and planning, and the end result is turning eating from an act of pure consumption into one of enjoyment. But before doing anything, it’s good to start by asking…

Why do we eat when we’re not hungry?

It could be out of joy, but chances are it’s because we’re anxious, stressed, mad, tired, sad, bored. With these emotions perceived by the body as chronic stress, the brain releases cortisol, which can stimulate the appetite, says Dr. Lilian Cheung, a lecturer at the Harvard T.H. Chan School of Public Health’s department of nutrition. As a result, we may turn to food.

Rarely is it cauliflower. The science of cravings is complex, but we’re often seeking salt, fat, and/or sugar. These hyperpalatable foods stimulate the release of dopamine, which can initially make us feel good and keep us wanting more, but "reaching for foods that comfort us may become habitual," she says.

Adding to the challenge? These snacks are seemingly everywhere in easy-to-carry, easy-to-eat containers and bags — in aisles, on racks, and, hey, look, waiting at the checkout line. That’s not an accident, Cheung says: companies pay a lot of money to place their craveable products within reach.

So what can you do?

Knowing that it’s hard is a strong start, Cheung says. After that, go to the supermarket with a list and a full stomach. Both will keep you focused and prevent being enticed. And since healthier products aren’t always placed at eye level, she brings a pair of tongs in order to reach the top shelves.

But this isn’t just about shopping for food; it’s ultimately about eating, and that starts with awareness. McManus suggests tracking your food for three days, paying attention to time, quantity, what was happening before you ate, and how you felt afterwards.

You’ll notice patterns and discover your personal cues. It could be that you tend to eat when you see others eat, or when a movie starts you need popcorn, or when you’re sitting in traffic you grab a snack. Once you see the vulnerable points, you can start shoring them up, she says.

Becoming mindful when eating and enjoying all foods

Too often people eat while watching television, doing work, talking on the phone. Multitasking causes you to drift and then it’s "gobble, gobble, gobble," Cheung says. You have little chance to realize that you’re full, and end up eating more.

Instead, you want to make eating as attractive as possible. Designate a space. Use a good plate and placemat. Sit down — standing equals speed — and savor the meal; if you’re with others, enjoy the company. It can be just 15 minutes, but everything slows down and you’ll feel more satisfied.

"We need to eat with all of our senses," she says.

And that goes for all food. There’s no need to eliminate the things that taste good but aren’t the healthiest. Things like ice cream and cake are often connected to events worth celebrating. When you know they’re coming up, you can budget in those foods, then have a reasonable portion and "really enjoy eating each bite," Cheung says.

Use smaller utensils and let the treats sit on your tongue, because that stuff is eaten for the smoothness and sweetness. When you fully immerse yourself in the experience, a smaller portion is usually enough and there’s no need to feel guilty for having it.

Cheung adds that before you make any food decision, take a deep breath, coupled with your own personal prompt, such as, "Do I really want that?" or "How many treadmill minutes will that be?" That pause prevents you from being swept away and brings you back to your plan, allowing you to make your decision.

But it doesn’t always work and it’s difficult to be constantly aware. McManus says that’s all right. Perfection is never the goal, especially at the beginning. You’re trying to end an old habit and create a new one. "It’s a slow process," she says.

Cheung says that at first, resist one of your weaknesses, and when you do, praise yourself. The next month, resist a few more, and share your successes with your family, letting them know what you’re trying to do and that your intent is to stay healthy for them.

"It’s an ongoing practice," she says. "You will build up your degree of mindfulness and over time you’ll see a major difference."