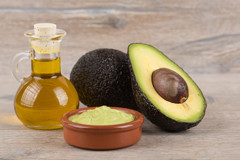 Each year, nearly a quarter of a million American men learn they have prostate cancer. Most are diagnosed with early-stage cancer that has not spread beyond the prostate gland. Traditional treatments include surgery, radiation therapy, and a “watch and wait” strategy called active surveillance. A new study published online this week in JAMA Internal Medicine indicates that diet may be an important add-on. The study, part of the ongoing Harvard-based Health Professionals Follow-up Study, suggests that eating more foods that deliver healthy vegetable oils can help fight the second leading cause of cancer death in men.

“It’s one of the first studies to look at dietary interventions after men have been diagnosed with prostate cancer,” says Dr. Marc B. Garnick, a prostate cancer specialist at Harvard Medical School and Beth Israel Deaconess Medical Center. “It supports the idea that you can potentially modify the behavior of prostate cancer that is still confined to the prostate gland.”

The study involved about 4,500 men who were diagnosed with nonmetastatic prostate cancer, which means it had not yet spread beyond the walnut-sized prostate gland. Since 1986, they have been reporting what they usually eat by completing detailed food surveys every four years.

Study participants who ate the largest amount of vegetable fats were less likely to die from prostate cancer—or any other cause—than men who consumed the most animal fats. Most of the vegetable fats consumed by the men came from oils in salad dressings and nuts.

The men who consumed the most vegetable oil lived longer, in part because their cancers were less likely to spread beyond the prostate gland. That suggests, but does not prove, that a diet rich in vegetable oils can slow the progression of the prostate cancer.

Earlier studies have implicated the traditional Western diet, which is relatively high in red meat and other sources of animal fats, with a higher risk for developing prostate cancer in the first place, while eating more vegetable oils and vegetable protein may help prevent it.

“One of the things I tell my patients is not to eat animal fat, or to at least limit its consumption,” Dr. Garnick says. He bases this advice on decades-old data that show a direct relationship between the amounts of animal fat consumed and incidence of prostate and other cancers. It’s never been possible to prove cause and effect between dietary fat and cancer, but this new study lends support to the idea that animal fats may modify the characteristics of prostate cancer.

Although the study focused on oils and fats, it’s important to consider what the men who consumed a lot of vegetable oils were not eating: refined carbohydrates, such as processed white bread, white rice, and desserts.

In the study, men who replaced 10% of their total calories from carbohydrates with calories from vegetable oils were 29% less likely to die from prostate cancer or any other cause over eight years of follow-up.

This one study, of course, can’t prove that a healthful diet fights prostate cancer. For one thing, this type of long-term follow-up study can only show an association between diet and prostate cancer. There were also some differences between the groups. The men who ate the most vegetable oil were healthier to start with. At diagnosis, their blood levels of PSA—a marker for cancer activity—were lower than in the group that ate the most animal fat. Conversely, the men who ate the most animal fats had more unhealthy characteristics. They were more overweight and less physically active, and more of them smoked (7% compared with about 1% in the vegetable-fat group).

Researchers used statistical methods to compensate for these important differences. “Any of these negative influences would independently lead to a worse outcome,” Dr. Garnick says. “Have they accounted for everything? In these studies, you can never be sure.”

So we don’t really know what contributed most to keeping prostate cancer in check—eating more beneficial vegetable oils, eating fewer (or healthier) carbohydrate-rich foods, or eating less meat. It may not matter, since all three are part of a healthful diet.

The JAMA Internal Medicine study, like so many others before it, endorses an overall healthy diet that goes easy on red meat and includes generous amounts of plant foods that deliver healthy mono- and polyunsaturated fatty acids. These come from foods like avocados, walnuts, and soybean, canola, and extra virgin olive oils. That kind of diet has been linked with lower risks of heart disease, cancer, and a host of other chronic conditions.

This week is Men’s Health Week. As we cruise toward Father’s Day, I hope that all men will give themselves the gift of health. One important step in that direction is adopting a diet that may fight prostate cancer and will benefit everything from the head to the feet.

In many other countries around the world prostate cancer is rare compared to the US. It is most likley diet related like the article says. Bottom line: don’t eat like the typical American if you don’t want to have the same health issues as the average American.

many people are fighting the stages of cancer please give the knowledge to stop this disease.

Just remember that at all times, were fighting the early stages of cancer!