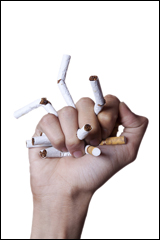 Smokers struggling to quit may feel they are living the myth of Sisyphus, who was condemned for eternity to roll a boulder up a mountain and then watch it roll down again. Why is it so incredibly hard to quit—even when you are desperate to do so? For some people, the answer may be in their genes.

In a report published online in the American Journal of Psychiatry, a team led by Dr Li-Shiun Chen of the Washington University School of Medicine identified a “high risk” version of a nicotine receptor gene that is more common in heavy smokers. The scientists compared thousands of smokers with and without the gene who were enrolled in two different studies. Those with the high-risk gene took two years longer to quit smoking. However, there was one silver lining in the cloud of tobacco smoke: smokers with the high-risk gene were three times more likely to respond to smoking cessation therapies.

The study provides hope for even hardcore smokers, and is consistent with what doctors see in the clinic. “It does typically take repeated attempts to kick the habit, and past failures are not predictive of future success,” says Dr. William Kormos, editor in chief of Harvard Men’s Health Watch and a primary care doctor at Massachusetts General Hospital. “All smokers should try to quit as often as possible. Practice makes perfect.”

However long it takes, quitting is beneficial. In a study published in the current issue of Archives of Internal Medicine, researchers pooled results from multiple studies of how smoking affects one’s risk of premature death. Data from 17 studies conducted in seven countries showed that quitting smoking reduces the risk of dying—even in people in their 80s. “Even older people who smoked for a lifetime without negative health consequences should be encouraged and supported to quit,” the researchers wrote.

A commentary in the same issue of the Archives pointed out that one in every two smokers will eventually die from the habit. And that doesn’t even include the impact on daily quality of life. Yet even smokers who try like crazy to quit still end up like Sisyphus. What can they do?

For one thing, don’t wait for a serious health crisis to seek help for smoking cessation. “All too often, the motivating factor for the successful quit attempt is a major health event, like cardiac bypass, stroke, or lung cancer,” Dr. Kormos says. “This finally motivates the patient to quit and they are usually successful.”

For others, the turning point is a “near miss,” such as admission to the hospital for chest pain. “So, the key is trying to get people to create the urgency that these health problems create, without having to wait for the health problem,” Dr. Kormos says.

Stubbornness: the key to success

Once you have decided to go for it and set a quit date, what’s next? First off, don’t be discouraged by past unsuccessful attempts. Just because nicotine replacement therapy didn’t work before doesn’t mean it won’t work this time.

The average person quits five to seven times before succeeding. To get there, it’s wise to try different things at the same time. For example, a form of counseling called cognitive behavioral therapy has helped many people to quit, especially in combination with smoking cessation tools like nicotine patches or medications.

Options to help you stop smoking: