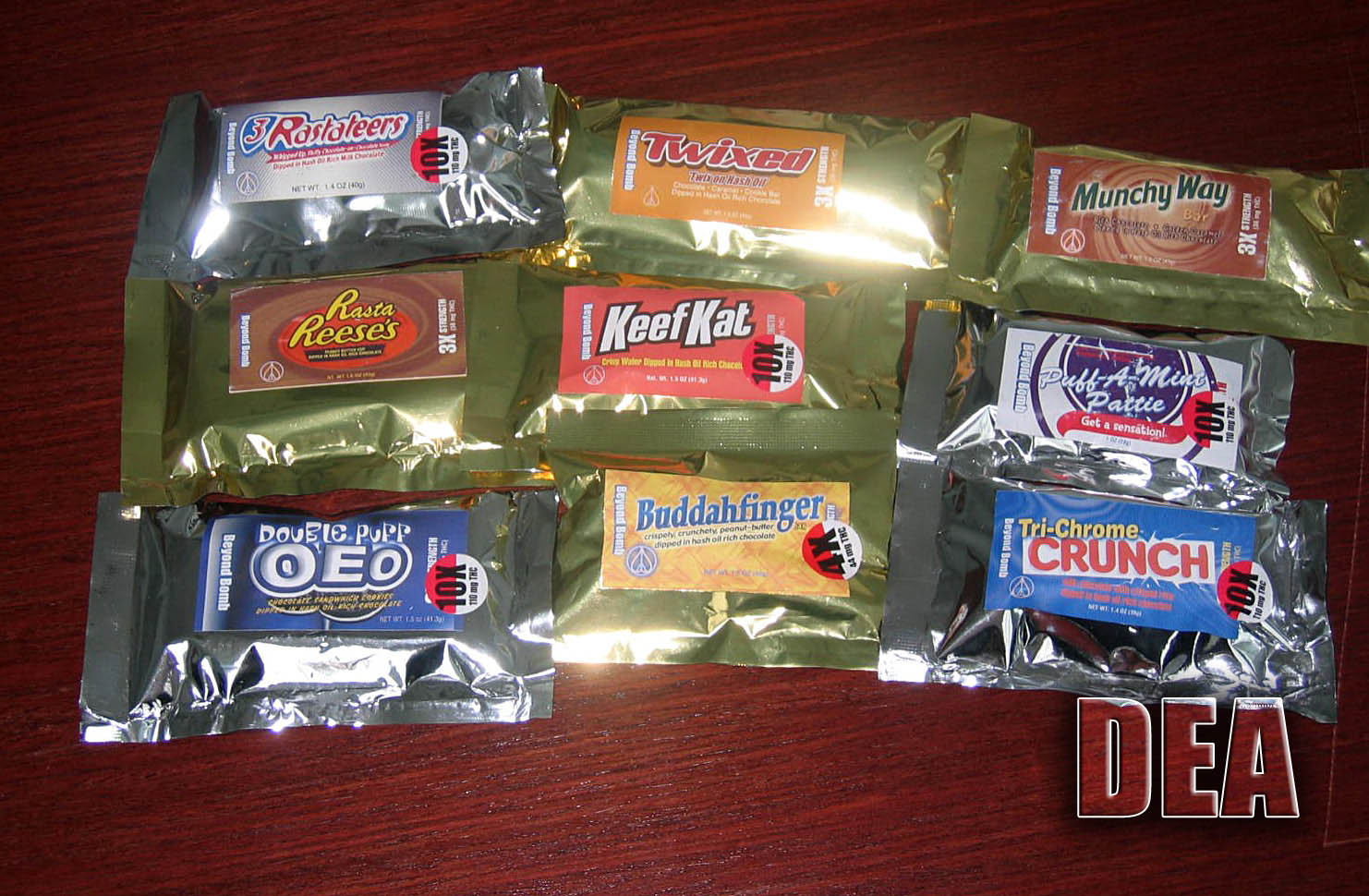 When I was a college student in the ’70s, marijuana-laced brownies were a novel way to get high (I never inhaled!). They are still a staple of some parties. Now a new generation of “food companies” is taking the concept of edible marijuana in a somewhat scary new direction: marijuana-laced foods that mimic popular candies. These sweets could pose a danger to children, warns a Perspective article in today’s New England Journal of Medicine.

In the article, Robert J. MacCoun and Michelle M. Mello of Stanford Law School explore the promotion of edible marijuana, which can now be bought legally in four states — Colorado, Washington, Alaska, and Oregon — alongside the more traditional smoked form. As other states explore decriminalizing marijuana, the market for these products is likely to grow.

From a marketing perspective, it’s a cute concept to sell Buddahfingers that look like Butterfingers, Rasta Reese’s that mimic Reese’s Peanut Butter Cups, or Pot-Tarts that resemble Pop-Tarts. Adults would get the joke. But it’s no laughing matter for kids who accidentally eat the marijuana-based product thinking it’s candy.

To make matters worse, some of these products contain up to four times the “safe” dose of tetrahydrocannabinol (THC), the active ingredient in marijuana. Overdosing isn’t just a theoretical concern.

In Colorado, it’s been legal to buy and use medical marijuana since 2000. In 2014, the state became the first in the nation to okay the sale of marijuana for recreational use. But as Dr. Tista Ghosh and her colleagues from the Colorado Department of Public Health write in a separate New England Journal of Medicine article, there’s been an increase in emergency visits to Denver-area children’s hospitals because of kids accidentally eating edible marijuana products. And marijuana-related calls to the Rocky Mountain Poison and Drug Center have increased 70% since recreational marijuana got the green light.

Although it’s illegal for anyone in Colorado under age 21 to buy marijuana, the packaging of edible marijuana seems to be aimed in part at children. It’s a bit like the Joe Camel cigarette ads that once targeted youthful smokers, write MacCoun and Mello. (Click here to listen to an interview with Robert MacCoun on edible marijuana.)

Edible marijuana exists in a legal gray zone. Marijuana is what’s known as a Schedule 1 drug. According to the Drug Enforcement Agency, that means it has “no currently accepted medical use and a high potential for abuse.” Other drugs in this category include heroin, ecstasy (methylenedioxymethamphetamine), and LSD. The FDA can’t currently regulate the sale of Schedule 1 drugs, so it can’t regulate edible marijuana products. The federal Department of Justice could step in but likely won’t, say MacCoun and Mello. The department doesn’t plan to go after people whose actions may violate federal law (under which it is illegal to use, sell, or possess marijuana) but who aren’t violating state or local laws.

MacCoun and Mello aren’t calling for the shutdown of edible marijuana. Instead, they are raising the issue in hopes of creating a more rational state and federal approach to marketing and selling it. Important steps would include

On the scale of public health issues, regulating edible marijuana takes a back seat to making sure kids are vaccinated or getting enough exercise. But anything we can do to protect children from harms they shouldn’t be facing in the first place is worth pursuing.

Yup, I do agree that this is better than smoking marijuana. I’m curious if they have mixed this with other snacks such as chocolate bars, maybe, or even cookies, to make it tastier?

Despite the fact that its unlawful for anybody in Colorado under age 21 ti purchase Maryjane, the bundling of consumable pot is by all accounts pointed to some degree at kids. It’s somewhat like the joe camel cigarette advertisements tha once focused on energetic, compose MacCound and mellow.

Interesting article. What are the long term issues associated with children over-dosing? What about the health issues of those children who have parents who smoke around them and they get a contact high, maybe not even realizing it?

Thanks so much for sharing useful info. This is the best post I have seen about the subject
Hoa lan Sai gon