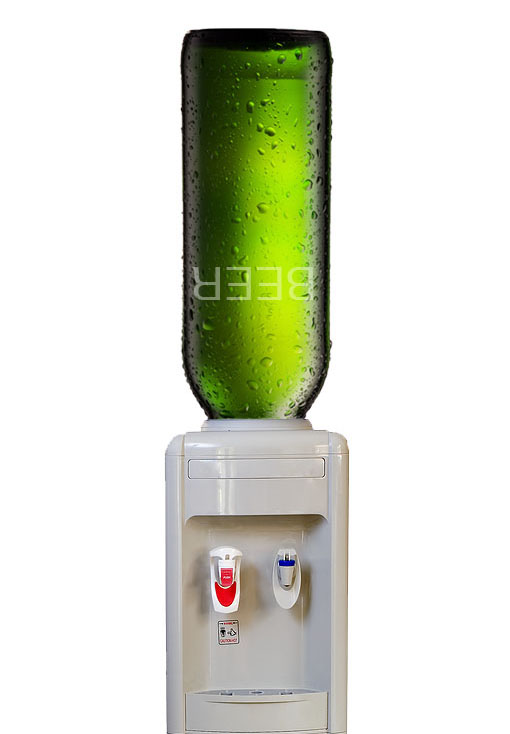 “They say a man’s work is never done. They say you can’t mix business with pleasure. They say that good things come to those who wait. It’s a good thing they don’t work here.”— Anheuser Busch Super Bowl 2012 commercial.

That’s the voice-over in an ad promoting Bud Light Platinum, a new beer from Anheuser Busch. The ad shows mostly thirty-something men and women drinking Bud Light Platinum in what is clearly an office environment. The message is unmistakable: you can mix business with pleasure, and why wait until you leave work to have that first drink?

Anheuser Busch may be capitalizing on what is already an emerging workplace trend. An article by Bloomberg.com reports that companies like Twitter and Yelp stock beer in office refrigerators. “We treat employees as adults,” Twitter spokesperson Jodi Olson told Bloomberg.com, “and they act accordingly.”

Not just for Mad Men

Drinking on the clock is nothing new. As William J. Sonnenstuhl writes in his book, Working Sober, “throughout American history, drinking and work practices have been closely intertwined and some occupations continue to regard drinking at work as an acceptable practice.”

Although drinking on the job may not be as widespread as portrayed on the hit TV show Mad Men, it is still with us. A report for the National Institute of Alcohol Abuse and Alcoholism (NIAAA) indicates that about 8% of full-time employees report having five or more drinks on five or more occasions a month. That’s edging into what most experts now call “risky drinking.” A survey of 6,540 employees at 16 workplaces representing a range of industries showed that 23% of upper-level managers reported drinking during work hours in the prior month. According to that study, both heavy drinking the night before work and drinking immediately before or during working hours contributed to work performance problems.

Excessive drinking costs $223 billion a year, or about $750 for every man, woman, and child in the United States. These costs come mostly from reduced workplace productivity, health care expenses for problems caused by excessive drinking, law enforcement and other criminal justice expenses related to excessive alcohol consumption, and motor vehicle crash costs from impaired driving.

Some of these costs are generated by the nearly 18 million Americans who are alcoholics or have alcohol-related problems. But there’s another group that also contributes. My colleague, Dr. Robert Doyle, and I call the people in this nearly invisible group “almost alcoholics.” Though none fit the criteria for alcohol dependence or abuse, they may be slowly veering in those directions.

As we describe in our forthcoming book,  Almost Alcoholic: Is My (or My Loved One’s) Drinking a Problem?, many people in the “almost alcoholic” group have declining job performance and/or declining health, though most don’t yet link their problems to their drinking.

Given that so many Americans have trouble with alcohol, we could use fewer opportunities to drink, not more of them. Relaxed corporate policies toward drinking on the job could nudge more employees into the almost alcoholic zone or beyond. When it comes to drinking and work, there should be a clear boundary between business and pleasure. To riff on the Anheuser Busch commercial, good things don’t necessarily happen to those who don’t wait.

Joseph Nowinski, Ph.D., is a nationally known clinical psychologist with more than 20 years’ experience working with individuals and families. With psychologist Barbara Okun, he wrote Saying Goodbye, a 2011 book from Harvard Health Publishing. His next book for Harvard Health Publishing, Almost Alcoholic, written with Robert Doyle, M.D., will be published in April 2012.

Related Information: Alcohol Use and Abuse