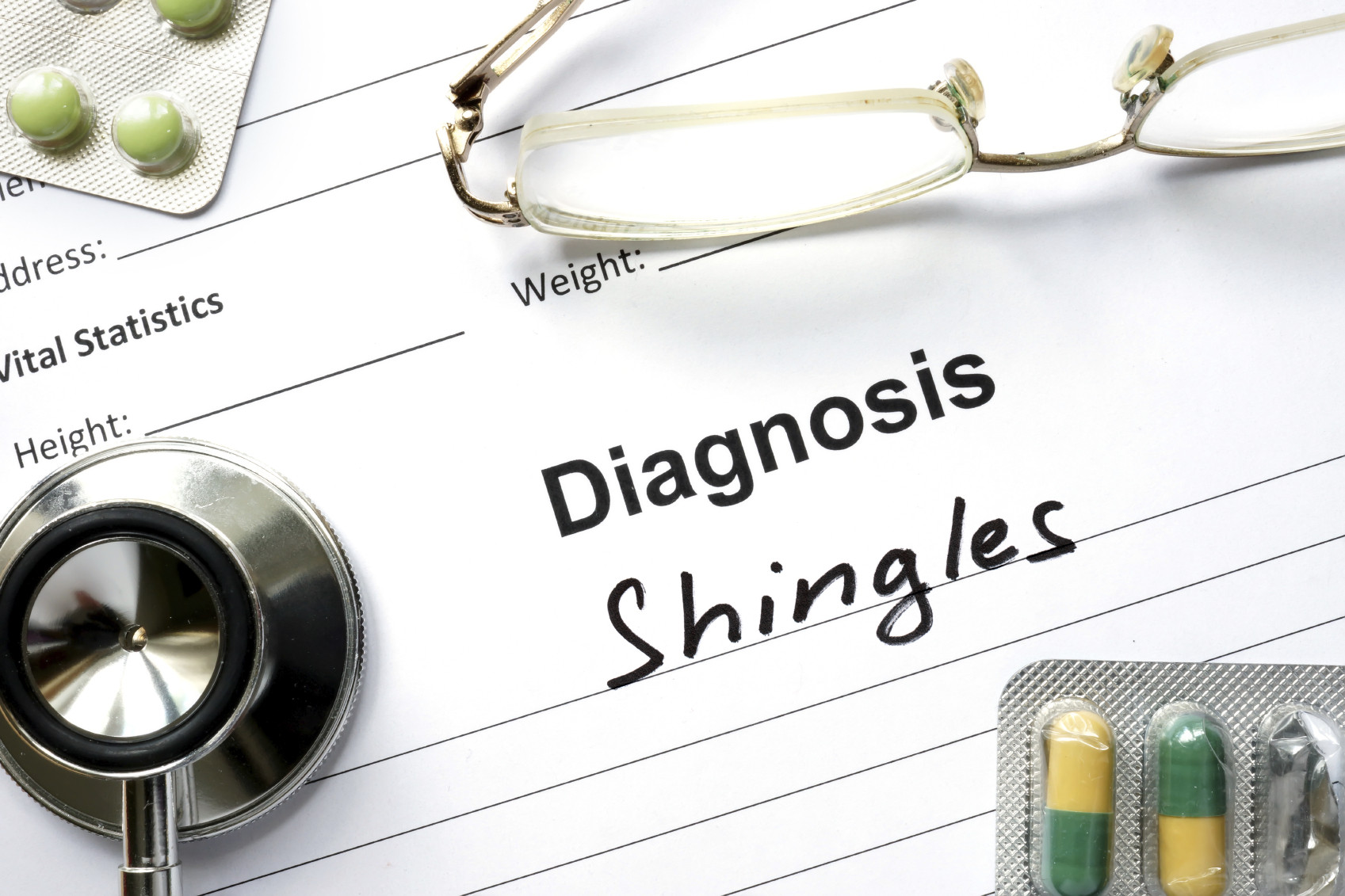 If you had chickenpox as a kid, there is a good chance you may develop shingles later in life. “In fact, one in three is predicted to get shingles during their lifetime,” says Dr. Anne Louise Oaklander, director of the Nerve Unit at Harvard-affiliated Massachusetts General Hospital.

The same varicella-zoster virus that causes chickenpox also causes shingles. After the telltale spots of chickenpox vanish, the virus lies dormant in your nerve cells near the spinal cord and brain. When your immunity weakens from normal aging or from illnesses or medications, the virus can re-emerge. It then travels along a nerve to trigger a rash in the skin connected to that nerve. The rash often appears on only one side of your body. The most common locations are the chest, back, or stomach, or above one eye.

Most cases of shingles cause severe pain and itching, and can leave scars. Fluid-filled blisters develop, break, and crust over during and a few weeks after an outbreak. You also may feel sick or fatigued, with a slight fever or headache. However, it is possible to have rashes that are so mild they’re not even noticed.

Many people have the mistaken impression that, like poison ivy, shingles is a nuisance rash that fades on its own. “But in fact a shingles rash should alert people, especially in middle or old age, to seek immediate medical help,” says Dr. Oaklander.

Rapid treatment with one of three antiviral drugs, acyclovir (Zovirax), valacyclovir (Valtrex), or famciclovir (Famvir), can shorten a shingles attack and reduce the risk of serious damage, such as:

The Centers for Disease Control and Prevention recommends that almost all people ages 60 and older be vaccinated against shingles, whether or not they had chicken pox in their youth or have had shingles before, says Dr. Oaklander.

The vaccination that prevents chickenpox in children was used to develop a similar vaccine (Zostavax) that protects against shingles. “It reduces the risk of getting shingles by about half, and shingles rashes that still develop are slightly less likely to cause postherpetic pain, or other serious complications,” says Dr. Oaklander.

People with especially weak immune systems, such as those with cancer or anyone undergoing immunosuppressive treatments, should avoid Zostavax since the vaccine contains a weakened form of the live virus. Because Zostavax has only been available since 2006, it is still not yet clear if a single vaccination offers lifelong protection, but at this time, no booster is recommended.

A new shingles vaccine called HZ/su also may be helpful for older adults. A study published in The New England Journal of Medicine found that the vaccine was 97.2% effective among those ages 50 and older, and 97.9% effective for those ages 70 and older. And since HZ/su is not made from a live, weakened virus, it is safe to give to people with weak immune systems. This vaccine still needs to undergo further testing before it can be submitted for FDA approval, which may happen as early as this year.

I am normally a healthy adult, mid-40s, who rarely gets sick but was going through a period of high stress and started feeling an annoying poking pain in my back. It started presenting a week later as a handful of sores in an area about an inch wide. I quickly went to my local nurse practitioner, who prescribed Valtrex and said to get it right away. I went to my local pharmacy, took it immediately, and the problem quickly went away. The sores scabbed and disappeared over a couple of months, but the pain and flu-like symptoms were gone almost immediately. I guess I was lucky that this wasn’t so bad. Maybe the minimum age to get the shingles shot should be 40, not 50?

I got shingle i went alest 3 week my wife thought it was posion ivy .went to emergency room i a world of hurt it started mid chest and wrapped around to my spine it was the most painful thing i ever been threw two week late had stress test they said i had a heart of a lion a week later had heart attack renal failure and septis and severe dehydration on a cellular level woke to priest reading me my last rights sat told the priest you have the wrong room the shingles were telling something bad was going on was weight lifter i artery was 4x larger and 3 were 90 persent clogged they had to look in artery with scope to see what was wrong Thank GOD and great drs @ holmes regional

Can acylover be replaced by xifaxan? because my doctor did ,due to having constant diarehea already for 10 years.

Just went to my grocery store and got the vaccination. No biggie. However, Zostavax only has a 50% prevention rate based on CDC, but that’s better than no percentage.

My husband just died of a myocardial infraction(Jan23,2016). There was no warning he was 57 yrs old .Autopsy revealed ischemic heart disease. He had Shingles in late Sept. I am at a loss in more way than you can imagine…

My husband just died of a myocardial infarction, Jan 23 2016. No warnings… He was 57yrs old. autopsy revealed
ischemic heart disease. He had shingles late Sept. Would that contributed to his death? I’m at a loss in more ways than I can describe.

Dawn Iam sorry for your loss

In 1st week of January,2016 I had a *Strange Pain in middle of Back and thought it was “L-3” acting up!? I went to my. Primary Dr & he just prescribed “Prednisone”?! I have had it before & didn’t want to take it! That was on *Fri. Jan. 8, & then next day, which was a Saturday -Jan.9th The Weird type of “Burning, Painful to even fabric touching it & it had started going around left to end at my *Navel!?? It was half way roung my waist; So after procastinating; I went to “ER at 7:30 that night! The *Nurse-Practitioner looked at my waist; which had no *Redness, Rash or Pimples?!? I’m trying to describe the *Strange Invisible Pain; Thinking maybe it was something inside?! But, She Had Said after taking my Age, The fact I had. “ChickenPox at age 4, and She Said it Sounded like the Early Stage of **Shingles!!! She had **Blood Work Done & Prescribed “Acyclovir 800mg-to be taken **5 times daily! I Left & Walgreens Pharmacy was open so filled it and took one that night! I had an “lumbar Epidural For Sciatica scheduled for Jan 12th & Had to Cancel; Due to AntiViral Meds and I must be in **Excellent Health when I Get The Epidural!! So, I kept taking the 5 “Horse Pills” daily; But by Wednesday-Jan 12-** after 3 days on “Acyclovir 800mg, 5 times daily-*I was Hit with a Daily Colon CleansIing! Like when you prep for **Colonoscopy?! It was so Bad, I Almost lived in the **Bathroom!! It was also very painful in large Intestine & Colon!! By Sat. Jan 16 finished Antiviral Meds & Never Devveloped any Redness, Rash or Pimples & The Burning “Nerve Pain Went away”. Now, got my “Epidural on Feb. 8,2016, and I was told to get **Shingles Vaccine; after My Symptoms went away?? But, I don’t know if I have to wait for a certain time after my **Epidural Due to “Immune System Complications? But, I lucked out & caught the **Shingles before it did any Damage! Last thing need is “Full Blown Shingles and Lasting **Nerve Pain! That along with **Sciatica Pain Would Be A – Fate I Wouldn’t Want to Live With!!” So, Now you know how my First month of 2016 Was; Any Thoughts on **Shingles Vaccine?? They said I Could Get it AGAIN!??! Help?

Lucky you that you laid off the prednisone. Taking that would’ve suppressed your immune system and given you a full blown case of shingles that would’ve been a bear to manage!

I got shingles in my eye at 40years old, now I have a scar in the center of my eye (lost a lot of my vision).