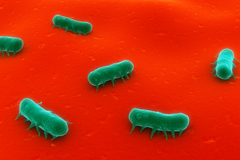 In the movie “Wedding Crashers,” Owen Wilson and Vince Vaughn made party crashing seem like harmless fun. A different sort of party crasher—microbes with names like Campylobacter and Salmonella (pictured to the right)—sicken nearly 50 million Americans each year.

Holiday buffets and dinners are a more inviting setting for the microbes that cause food poisoning than are most regular meals. Even so, there are many things you can do to keep your food, and your guests, safe.

As described in the December issue of the Harvard Women’s Health Watch, you can wash off most bacteria on fruits and vegetables. When it comes to meat, fish, and poultry, though, only thorough cooking destroys potentially harmful microbes. In addition, bacteria thriving in the “danger zone”—temperatures between 40° F and 140° F—can produce illness-causing toxins that aren’t destroyed by cooking.

Here are some food-safety tips:

Buffets. Don’t let prepared foods sit out for more than two hours. Divide each dish into smaller portions and refrigerate or keep hot as necessary. Replace dishes as they empty. Wash a serving dish before reusing it.

Stuffing. Stuffing packed in the cavity of a turkey can pick up bacteria from the internal drippings as the bird cooks, and the stuffing might not get hot enough to destroy the bacteria before the bird is done. The safest approach is to cook the stuffing separately.

Pumpkin pie and eggnog. Eggs—an important ingredient in both of these holiday treats—can contain small amounts of the Salmonella. To destroy this bacterium, cook all egg-containing foods to a temperature of 160 degrees F. (Recipes for cooked eggnog are available on the Web).

Food gifts. Prepared foods that travel more than two hours must be kept chilled or frozen en route. If a frozen food arrives fully thawed or a chilled food arrives at room temperature, discard it.