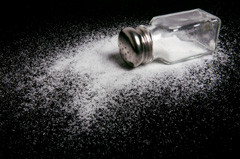 A paper in today’s Journal of the American Medical Association (JAMA) offers the contradictory conclusion that taking in less salt—a key goal of U.S. health and dietary recommendations—is bad for you. But before you roll your eyes and groan about flip-flops in science, know that this study isn’t the kind of work on which you or anyone should base dietary decisions.

In this study of 3,681 men and women from Belgium, Bulgaria, Italy, Poland, Romania and Russia whose health was followed for eight years, participants with the lowest sodium excretion (which is a good measure of sodium intake) were 56% more likely to have died from cardiovascular disease than those with the highest sodium excretion. Among the nearly 2,100 participants with normal blood pressure at the study’s start, sodium excretion (sodium intake) had no effect on the development of high blood pressure.

These are startling findings. If true, they would undercut major programs by the U.S. government to reduce Americans’ intake of salt—the main source of sodium—from prepared and processed foods and at home.

But the results and conclusions probably aren’t valid, or at least don’t apply to most Americans. Flaws in the JAMA study include the young age of the population (49 at the study’s end), short duration, and too few deaths and cardiovascular problems to make valid comparisons. (For a more in-depth evaluation, see the critique of the study on The Nutrition Source, from the Harvard School of Public Health.)

The only way to settle the ongoing debate about salt intake, blood pressure, and cardiovascular disease is with a large trial in which half of the volunteers are randomly assigned to follow a low-sodium diet and the other half are randomly assigned to a “usual” diet (which in the U.S. means high sodium), and the participants are followed for years. It isn’t likely that such a study will ever happen.

I’m still swayed by the weight of the evidence supporting a connection between taking in too much salt and the development of high blood pressure, stroke, heart attack, heart failure, and other cardiovascular conditions. But if you are leery about the low-salt message and serious about preventing heart disease, there are other things you can do to keep your blood pressure from creeping higher:

Losing weight if you are overweight can help. Among overweight people, losing just 5 percent of body weight significantly cuts the risk of developing high blood pressure.

A healthy diet is another way to keep blood pressure in check or lower it without medication. The DASH diet—eating more fruits, vegetables, whole grains, and low-fat dairy foods, and cutting back on animal fats, sweets, and sugary beverages—has been proven to reduce blood pressure.