Cities can learn lessons about diabetes from rural areas

City dwellers often think of rural America as a throwback to past “good old days.” But when it comes to obesity and diabetes, people living outside urban areas offer a frightening glimpse of the future.

Last week I had the opportunity to moderate a panel discussion on rural health, sponsored by the Association for Health Care Journalists (AHJC) in Birmingham, Alabama. The discussion highlighted troubling statistics on diabetes, raised some knotty issues, and explored creative solutions.

More than 8% of Americans now have diabetes, a percentage that’s expected to grow along with our waistlines. Diabetes is already the nation’s leading cause of kidney failure, non-traumatic limb amputation, and new cases of blindness. It’s the seventh leading cause of death, and would rank higher if deaths from heart disease accelerated by underlying diabetes were included. What would a much higher diabetes rate look like?

The answer lies just outside nearly every metropolitan area in the diabetes belt that extends across the Southeastern United States. Surrounding Birmingham, Alabama, for example, are several rural counties where about 20% of people have diabetes.

“Diabetes is definitely not distributed evenly across the country,” said Dr. Andrea L. Cherrington, associate professor at the University of Alabama at Birmingham (UAB), pointing to a CDC county-level map of diabetes prevalence. It’s not just rural versus urban, Dr. Cherrington added. Urban areas in the diabetes belt have higher rates of diabetes than urban areas outside of the diabetes belt.

Dr. Cherrington next pointed to a map showing the U.S. counties with the highest levels of obesity. The map looks nearly identical to the diabetes map. The answer to obesity is better nutrition and more exercise. What makes it more difficult to manage weight in rural communities?

The answer to that question will look familiar to anyone who’s been to the less-advantaged parts of any U.S. town or city: barriers to health. These include:

Such barriers get in the way of exercising, eating a healthy diet, and other healthy lifestyle choices. They also lead to obesity and its many consequences.

“It’s not easy living with diabetes,” Dr. Cherrington said, noting that disease management requires mastering a complex schedule of medications, exercise, self-care, and doctor appointments. “If you overlay this regimen on these barriers to health, it becomes really challenging. If you don’t have resources, it is easy to see how disparity can exist.”

Battling the obesity epidemic has been the life work of panelist Bonnie A. Spear, professor of pediatrics at the University of Alabama, Birmingham, and a nationally recognized expert in child and adolescent obesity.

Too often, Spears argued, we fuss over details such as whether schools should offer chocolate milk rather than whether schools should be allowed to make money from on-campus vending machines, which often sell sugary soft drinks and snacks. Too often, she said, we worry about the cost of providing breakfast and lunch to too many kids when missed breakfast and poor nutrition are linked to lower test scores and difficulty concentrating. And when we worry that U.S. kids are falling behind in academics, physical education classes are the first thing to go—even though fit kids do better at academic subjects than unfit kids. Creating healthy school environments is crucial for preventing obesity and diabetes in the next generation of adults.

When it comes to adults who have diabetes today, one key problem is the lack of primary care physicians. While cities have too few of them, noted Dr. William Curry, associate dean for primary care and rural medicine at the University of Alabama, Birmingham,  the problem often is worse in rural areas, particularly for those who lack transportation.

That work has turned her attention to cities, as she now leads Birmingham’s Cities for Life program. Led by the American Academy of Family Physicians, with support from the pharmaceutical company Sanofi US, the program borrows from the rural community health worker concept by having doctors refer people with diabetes to “patient navigators” who help them find local resources such as nearby exercise classes or mobile farmers’ markets.

In addition to the clinical component of the program, its community component makes use of a community action team made up of more than 80 organizations drawn from local primary care, health, civic, business, and charitable organizations. A major part of this effort is the mydiabetesconnect.com website, which shows people where to find resources in their own neighborhoods.

Will it work? The program is just a year old, but Dr. Cherrington believes Birmingham eventually will become a model for diabetes control—in both urban and rural areas. 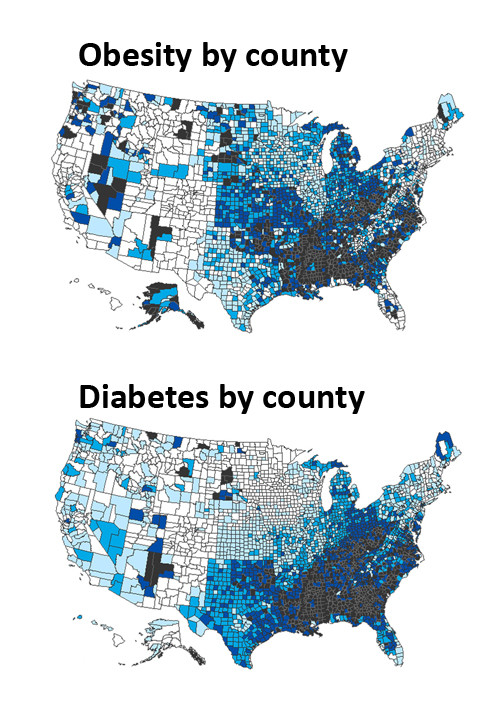 County-by-county maps of diabetes and obesity in the United States prepared by the Centers for Disease Control and Prevention. The darker the color, the higher the rate of obesity or diabetes. 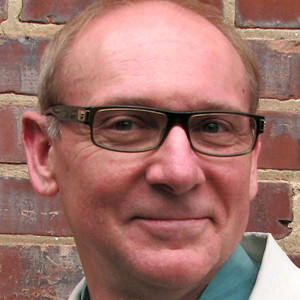 quite an interesting article

while these are troubling stats, it is excellent information. As always, we have to be intentional about our health, what we eat and the amount of physical activities we do, especially our children and the problems of childhood obesity.

I think obesity and diabetes are interrelated ,as this fact is looking obvious from map.
Yours is a good awareness program , it is going to help people n large way to find resources near them to fight diabetes .

Great post.Recent i read this post.Its very useful post.Thanks for sharing. i’m so much Happy 🙂

An interesting article. I hadn’t realised that there was such a disparity between urban and rural diabetes incidence.

I will say though that the graphs demonstrate a level of inconsistency in data collection on a state by state basis. There is a clear disparity in the measurement of diabetes and obesity between Texas and Kansas, and what would appear to be an absense of records for Colorado. I know that the graphs are only there do demonstrate the diabetes belt, but a scale would also be useful.

Thanks to my parent, I didn’t allow to eat any foods without their knowing. Besides, I also do not like to eat at any food courts and the like 🙁
I prefer to make by myself than other people do. it’s more assure myself for the nutrients and the advantages for my health 🙂

great article. I am interested to know if you have done any research on natural remedies and its effects on diabetes within the Native Americans and African American communities?

Thanks for your interest. Most of our research has focused on linking individuals to community resources, encouraging lifestyle modification, and empowering folks to ask questions of their care providers. That often includes discussing potential over the counter drugs and natural remedies so that providers know everything an individual is taking and there can be open discussion regarding patient goals etc. We currently have a project funded by the American Diabetes Association to develop an eHealth/Community Health Worker intervention to improve diabetes-related outcomes in low-income African American communities.

Please,be aware of prescription drugs that potentiate diabetes.
Eli Lilly Zyprexa Olanzapine issues.
The use of powerful antipsychotic drugs has increased in children as young as three years old. Weight gain, increases in triglyceride levels and associated risks for diabetes and cardiovascular disease. The average weight gain (adults) over the 12 week study period was the highest for Zyprexa—17 pounds. You’d be hard pressed to gain that kind of weight sport-eating your way through the holidays.One in 145 adults died in clinical trials of those taking the antipsychotic drug Zyprexa.
This was Lilly’s #1 product $5 billion per year sales,moreover Lilly also make billions more on drugs that treat diabetes.
— Daniel Zyprexa activist and patient. 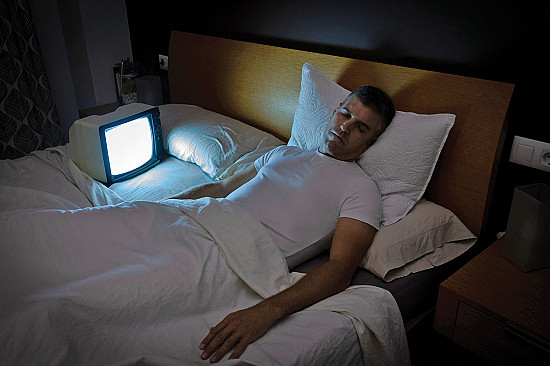 Light during sleep linked to conditions that harm the heart