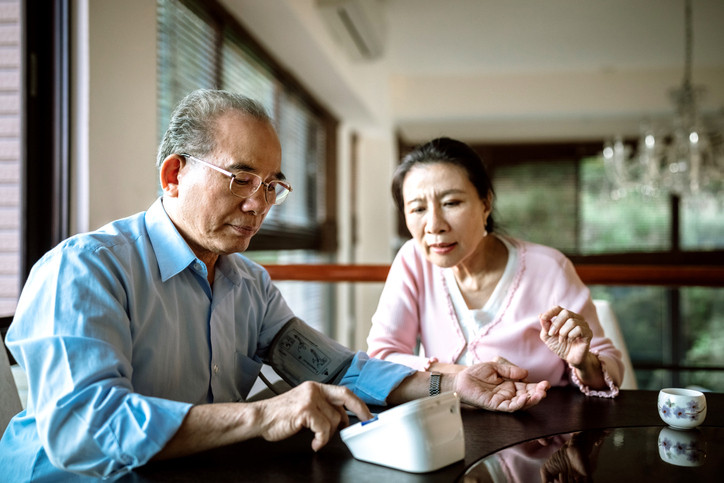 Cognition encompasses thinking, memory, language, attention, and other mental abilities. Researchers have known for many years that if you have high blood pressure, you have a higher risk of developing cognitive impairment and dementia. However, just because high blood pressure is a risk factor, it does not necessarily mean that lowering high blood pressure will lower your risk. Many things in health and science correlate without one causing the other (my favorite is the correlation between the drop in birth rate and the decline in the stork population). Thus, randomized, double-blind, controlled studies are needed to answer this question.

Prior studies have not provided clear answers

There have, in fact, been a lot of these studies. The most recent relevant study is the SPRINT-MIND study, designed to measure the effects of lowering high blood pressure on dementia and/or mild cognitive impairment. This study was so successful at reducing the risk of mild cognitive impairment by lowering high blood pressure that it ended early, because the data and safety monitoring board felt that it was unethical to continue the control group. However, the dementia endpoint had not yet reached statistical significance — likely because of this early termination. Thus, while the study succeeded in one sense, it ultimately concluded that treating systolic blood pressure to below 120 mmHg (versus lower than 140 mmHg) did not reduce risk of dementia.

A new analysis of many studies

The relationship between high blood pressure and dementia

So, how does lowering high blood pressure reduce our risk of cognitive impairment and dementia? Most people who have dementia don’t have just a single cause. Two or even three different problems in the brain cause their cognitive impairment and lead to their decline in function. One study estimates that the fraction of dementia risk attributable to cerebrovascular disease — that is, strokes — was nearly 25% in people who developed significant memory loss late in life. These researchers also found that the dementia risk attributable to Alzheimer’s disease was considerably higher, nearly 40%.

My reading of the literature is that lowering blood pressure reduces dementia risk because it reduces the risk of stroke. It’s the strokes — not high blood pressure by itself — that cause cognitive impairment. Note, however, that the strokes may be so tiny that one doesn’t even know that they have them. But developing a lot of these tiny strokes (or a few big ones) will greatly increase our risk of dementia.

The take-home message is clear: You can reduce your risk of cognitive impairment and dementia by lowering your systolic blood pressure to less than 120 mm Hg, preferably with aerobic exercise, a Mediterranean diet, and a healthy weight, and by adding medications if those lifestyle changes alone are not sufficient.

Can untreated sleep apnea eventually cause dementia? If so, will treatment 15 years after diagnosis make a difference?

I am a 66 1/2 year old African American male and I have always been concerned about having high blood pressure.
Before I was diagnosed I had syncope’s a couple of times a year and especially on flights longer than an hour.
I have been on a combination of 3 anti-hypertensive medications for ten years now. My bp went from 180/100and sometimes higher to 120/80 fairly regularly.
I am symptom free at this point. I weigh 220 lbs at 5’10”.
If I lost 40 lbs could I get off of meds?

what about acceptable systolic numbers for the elderly?– at age 80 do I really need to have the same numbers I had at 20? I take BP medication every morning and on a good day my numbers are never anywhere near 120!

The prescribed lifestyle changes apply to improve all aspects of your health, at any age, and may be even more important for seniors. Not that many people are willing to make those “simple” changes since they do not suffer immediate discomfort from their present habits.

It takes quite a bit more effort for me to eliminate foods with too much, salt, sugar and oil. Canned goods usually have huge amounts of salt. Breads have salt, sugar and emulsifiers and more. If you want to check your progress, just take an inventory of what you see in your shopping basket. Making everything from scratch is a major effort for most, but gets easier if you push yourself to do it regularly. How much do you want to survive?

If you do not prepare food for yourself then it gets even harder sometimes to arrange a healthy diet. For exercise, it can takes weeks of persistent practice to make it a strong habit and to get fitter, and not many are willing to commit to the long term. It can help to start a walking program with a group.

Why do these studies refer only to systolic BP numbers?

Very interesting and never thought about high blood pressure and dementia. I wonder since this study was shorten early if they had also considered those with low blood pressure? My grandma had low blood pressure but she also struggled with some form of dementia. Of course she lived to 92 and this was 40 some years ago before dementia was studied the way it is now. Would be interesting to read about how dementia has changed over the years!

Want other historical studies on this subject.