Biking and sex—avoid the vicious cycle 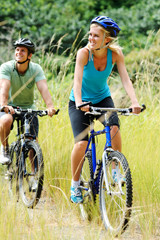 Bicycling is a terrific way to get from one place to another. It’s also an excellent form of exercise, providing the same health benefits as walking, jogging, swimming, and other aerobic activities. Some men and women avoid bicycling, though, because they worry that it may damage their reproductive organs and harm their sexual function.

Science supports this worry. But it mainly applies to people who cycle a lot. And it isn’t inevitable—there are many things you can do to protect your sexual health as you cycle to improve your overall health.

Blame it on the bike seat

When you sit on a chair, your weight is distributed across both buttocks. This takes pressure off the perineum, a region of the body that runs from the anus to the sex organs. It contains the nerves and arteries that supply the penis in men and the clitoris and labia in women. Sitting on a bicycle seat puts pressure on the perineum, compressing those crucial nerves and arteries. This can lead to loss of sensation and other problems.

Nerve damage accounts for the penile numbness that some male bikers experience. Pressure on the pudendal artery can add to this nerve injury to produce temporary or prolonged erectile dysfunction. A narrow bike seat can reduce blood flow to the penis by as much as 66%, and even a broad seat may reduce flow by 25%. The same processes account for bicycling-related sexual problems in women.

What the research shows

Over the past 10 to 15 years, several studies have linked bicycle riding with sexual problems. Here are a few examples.

Norwegian researchers evaluated 160 men who filled in a questionnaire after they participated in a bike tour of some 324 miles. One in five of the men had numbness of the penis, which lasted more than a week in some. Thirteen percent (21 men) developed erectile dysfunction that generally lasted more than a week.

Researchers from the National Institute for Occupational Safety and Health(NIOSH) evaluated 17 members of a bicycling police patrol unit in Cincinnati, Ohio. The men averaged nearly 5½ hours in the saddle each workday. Almost all of them experienced genital numbness from time to time. Those who rode the most were at the highest risk for erectile dysfunction, and the men who exerted the most pressure on their bike seats had the most problems. In a follow-up study, the NIOSH researchers found that bike-riding patrol officers who used a no-nose saddle reported penile numbness far less often than those using a standard saddle.

A team from NIOSH also looked at bike riding and sexual function in women who rode for an average of two hours several days a week. These women experienced decreased genital sensation compared to women to ran several days a week. In a later study, the team found that narrow seats and so-called cut-out seats increased pressure on the perineum.

You don’t have to give up biking to preserve your sexual function. In fact, you can break the vicious cycle of biking and sexual dysfunction by taking a few simple precautions.

Above all, be alert for early warning symptoms. If you experience tingling or numbness in your “privates”, get off your bike. If the problem recurs even with a broad, padded, well-positioned seat, consider switching to a recumbent bike.

Perhaps the best advice is to make biking part of a balanced fitness program instead of relying on it exclusively. Alternate riding with walking, jogging or swimming. Climb off your stationary bike and get on a treadmill, elliptical trainer, stair climber, or rowing machine.

If biking is your “thing,” mix it up. Exercising a few simple precautions will ensure that your passion for exercise doesn’t interfere with your passion in the bedroom.

Harvey Simon founded the Harvard Men’s Health Watch in August 1996 and was its editor in chief until retiring in May 2012. Dr. Simon is an Associate Professor of Medicine at Harvard Medical School and a member of the … See Full Bio
View all posts by Harvey B. Simon, MD
Share This Page Share this page to Facebook Share this page to Twitter Share this page via Email
Print This Page