6 healthy protein choices when cutting back on red meat 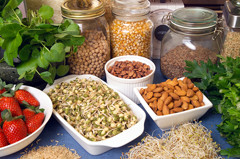 Turning vegetarian, or even vegan, isn’t necessary. But as we write in the June issue of the Harvard Men’s Health Watch, it does make sense to cut back on red meat and add in healthier sources of protein.

The new warning on red meat comes from a study of nearly 125,000 female nurses and male health professionals, whose diet and health have been followed by Harvard School of Public Health researchers for more than two decades. During this period, about 24,000 of the participants died from cardiovascular disease or cancer.

People in the study who ate the most red meat tended to die younger, and to die more often from cardiovascular disease and cancer. They also tended to weigh more, exercise less, smoke more, and drink more alcohol than those who ate less red meat. Yet even when the researchers compensated for unhealthy lifestyle factors, mortality and meat remained associated.

Compared to eating less than one serving a day of red meat, adding one daily serving increased the chances of dying during the study period by 13%. (A serving is three ounces, about the size of a deck of cards). Red meat meant beef, pork, lamb, and hamburger. For every extra serving of processed meat (foods like hot dogs, bacon, and cold cuts), the increase was 20%.

“This study provides clear evidence that regular consumption of red meat, especially processed meat, contributes substantially to premature death,” said Dr. Frank Hu, one of the senior scientists involved in the study and a professor of nutrition at the Harvard School of Public Health.

Cutting back on red meat offers a life-extending dividend. In the Harvard study, adopting a diet with less than half a serving of red meat a day could have prevented about 1 in 10 deaths, says Dr. Walter Willett, a senior scientist on the team and chair of the departments of nutrition and epidemiology at the Harvard School of Public Health.

Replacing one serving a day of red meat with one of these options reduced mortality in the study by 7% to 19%.

Of course, these numbers apply to a large group of people. How switching will affect you is hard to predict. It’s a good bet that reducing meat consumption—particularly processed meat—is likely to score you an advantage. “Making these kinds of decisions is like being a smart gambler,” Willett says. “Nothing is guaranteed, but this is putting the odds in your favor.”