The colon and the rectum—the two parts of the large intestine—are common places for cancer to occur. It is often a hidden cancer because it doesn't usually cause symptoms in its early stages.

Colon cancer affects men and women equally, usually after age 50. That's why experts recommend that adults be tested regularly for colorectal cancer after age 50. Testing is especially important for individuals who are at increased risk for developing colorectal cancer. That include those who: have had polyps (a benign growth in the colon or rectum); have a close family member with colorectal cancer; have ulcerative colitis or Crohn's disease; or who eat a fatty diet or smoke.

Symptoms of colorectal cancer include:

There are several ways to check for hidden colorectal cancer. The most effective test is the colonoscopy. In this test, a thin, flexible tube with a camera on the end is passed through the anus and up through the rectum and colon. Any precancerous polyps can be removed during the test. A sigmoidoscopy uses a similar tube, but it is able to look into only the lower portion of the colon. A third test, the fecal occult stool test, can be done at home. It checks for blood in the stool, which can be a sign of bleeding from a colorectal polyp or cancer.

Treatments for colorectal cancer include surgery, chemotherapy, radiation, or a combination of these. 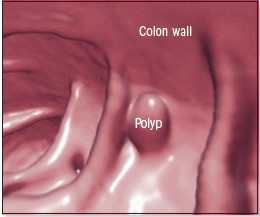 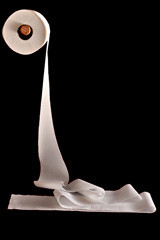 Laxative-free colonoscopy on the way?

Preparing for a colonoscopy