Moisturizers: Do they work? 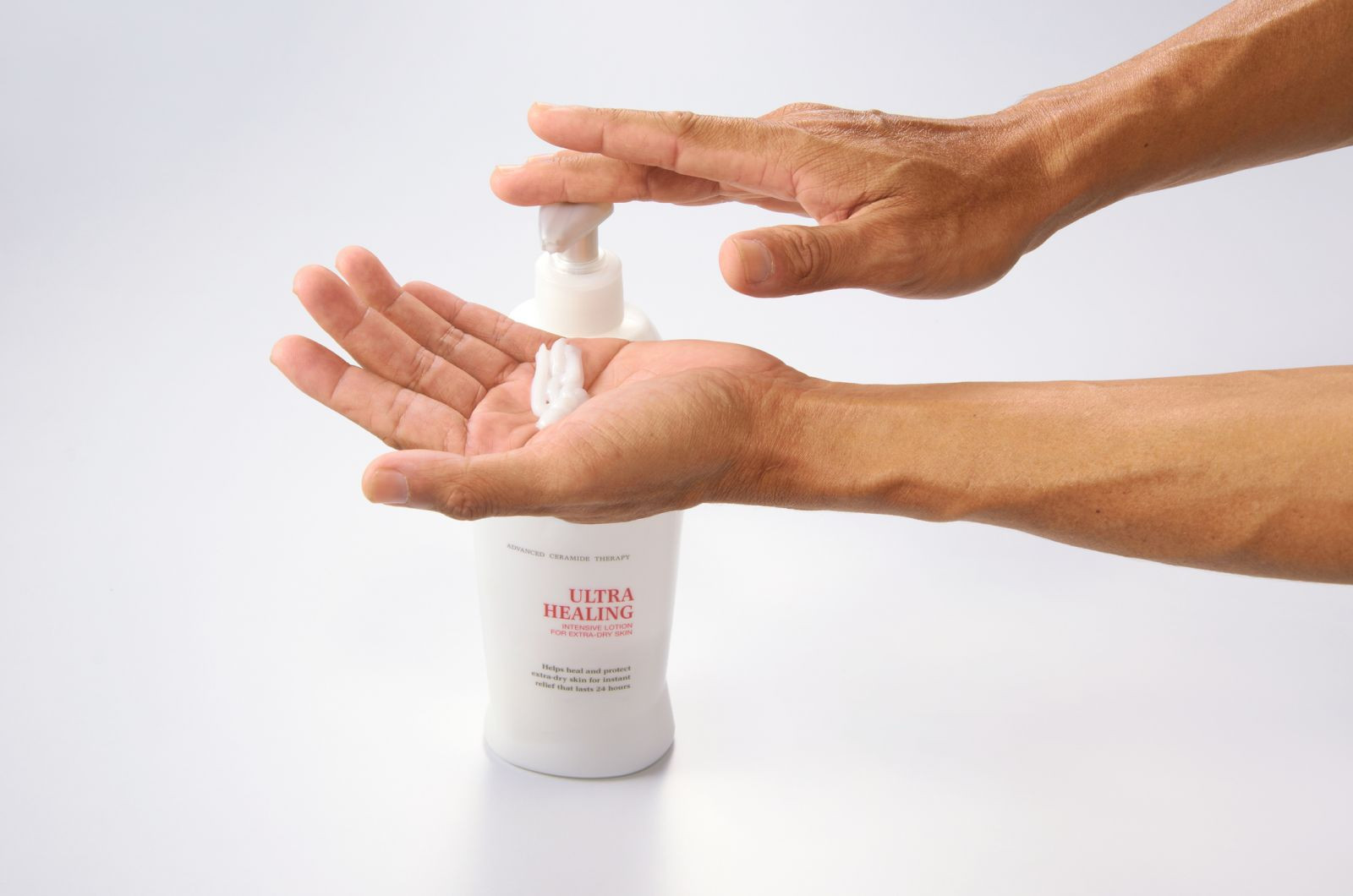 There are lots of dubious claims and mysterious ingredients, but yes, by trapping water, moisturizing can help with dry skin.

Dry skin by itself isn't a medical worry, although serious cases can result in cracks and fissures that invite infection and inflammation. The real issue is discomfort — dry skin can be sore, tender to the touch, and often itchy (although not all itchy skin is dry). There's also the red, rough, scaly appearance lamented in many advertisements for moisturizers.

This is one problem that hasn't suffered from lack of attention: there are dozens of creams and lotions for dry skin. They are sold as moisturizers, which is more of a marketing term than a medical or scientific one. Indeed, routine skin care is a realm where there's little science to be found. Well-controlled studies of ingredients are few and far between. Companies keep information about ingredients proprietary and are careful to limit claims for what the products do to stay within FDA rules.

But sales people learned ages ago that science sells, so labels and ads often use scientific terms. Moisturizers are often billed as hypoallergenic or "allergy tested" — even though there's no government standard for making such a claim, so any product can do so. Some products brag about being noncomedogenic — an impressive word that means they won't cause pimples — but that's not saying much: almost all moisturizers on the market today use ingredients that are noncomedogenic. Lists of vitamins are supposed to get us thinking that moisturizers can nourish skin or stoke it full of antioxidants. Yet in most cases vitamins in moisturizers probably don't make much difference, either because the amounts used are too small to have much effect, or because the vitamins degrade with exposure to light and oxygen.

The fact is that despite the long lists of obscure ingredients and the pseudoscientific hokum, all moisturizers help with dry skin for a pretty simple reason: they supply a little bit of water to the skin and contain a greasy substance that holds it in. In fact, if greasiness weren't a problem, we might all go back to using the solution for dry skin that our grandparents used: 100% white petrolatum, which most of us know as Vaseline. One reason for the proliferation of moisturizers is the continuing search for a mix of ingredients that holds in water like petrolatum but feels nicer on the skin. Many products also contain humectants (pronounced hue-MEK-tants), ingredients that sponge up and retain water.

The good news is that despite all the unknowns and salesmanship, you really can't go very wrong with what moisturizer you choose. Almost all the moisturizers on the market will help with dry skin, and in most cases, the choice comes down to subjective experience — and simply whether you like the feel and smell (nothing wrong with that — it's your skin, after all). You want to choose one you like and use it regularly.

Take a look at the drawings below, and you'll see that our skin is organized in layers. The outermost one is called the stratum corneum, which consists of cells called corneocytes and various lipids — fats — between them. The corneocytes are often compared to bricks and the intercellular lipids to mortar, an appropriate metaphor for a layer of skin that serves as a barrier, but the stratum corneum looks more to us like phyllo, the thin sheets of dough used to make baklava.

The corneocytes are dead cells without nuclei, but they aren't just deadwood. They contain various substances that hold water. For our skin to feel smooth and supple the stratum corneum has to be at least 10% water; ideally, it's 20% to 30%. The stratum corneum can absorb as much as five to six times its own weight and increase its volume threefold when soaked in water. But it's not simply the water content that matters. It's the effect that water has on the enzymes that control orderly shedding of corneocytes, a process dermatologists call desquamation. Without water, the corneocytes accumulate, so skin becomes flaky instead of peeling off nicely, and the stratum corneum gets disorganized and full of cracks instead of being tightly packed.

Because moisturizers contain oil, it's a common misconception that they are replacing lost oil. But most young children have wonderfully smooth skin, and the sebaceous glands in the skin don't start producing oily sebum until puberty. Dry skin is about lack of water, not oil.

Water. Most moisturizers are oil-in-water emulsions, so by definition that makes them creams and lotions. Look at the ingredient list, and you'll see that water is often the first one. Some of the water evaporates when you apply the moisturizer, but some also soaks in. While the stratum corneum absorbs water nicely, it doesn't bind it very well, so some oily substance is needed to hold it in. Applying an oily substance to the skin without also resupplying it with water — either from the moisturizer or from another outside source like a bath — is ineffective: you'd just end up with greasy skin that is still dry and cracked. In fact, the optimum way to soften skin is to soak it thoroughly first in water and then cover it with something like Vaseline. But that's time-consuming and messy so unless your skin is extremely dry, using a moisturizer that contains water is much easier and more practical.

Occlusives. Petrolatum and the other oily substances in moisturizers are sometimes referred to as occlusives because they block the evaporation of water. Despite all the elaborate variations in moisturizers, petrolatum is still a mainstay and is often named third or fourth in the ingredient list. Many fatty or waxy substances can serve as occlusives. The commonly used ones include cetyl alcohol (a fatty alcohol), lanolin, lecithin, mineral oil, paraffin, and stearic acid. Dimethicone and cyclomethicone are silicones that function as occlusives. When products say they are oil-free, that usually means they don't contain mineral or vegetable oil and depend on dimethicone as an occlusive instead. The Aveeno products tout their "natural" oatmeal content, but in some varieties, the only active ingredient listed is dimethicone. The effectiveness of the occlusives varies. Petrolatum is the best at holding in water, followed by lanolin, mineral oil, and the silicones.

Humectants. Theoretically, humectants pull water into the stratum corneum both from the air and from deeper layers of the skin. However, when the humidity is low, there's so little water in the air that almost all of the water comes from the inside out. Some of the commonly used humectants include glycerin, honey, panthenol (or vitamin B5, an example of a vitamin being used for its physical, not nutritional, properties), sorbitol (which we are used to seeing as an artificial sweetener), and urea. Humectants can potentially make skin even drier by pulling water into a damaged, arid stratum corneum that doesn't hold moisturizer. So, as a practical matter, they are almost always used with occlusive ingredients that trap the moisture the humectants draw into the stratum corneum.

Emollients. Emollients aren't in moisturizers to moisturize, but rather to make the skin feel smooth. Many ingredients that serve as occlusives — dimethicone is a good example — and humectants do double duty as emollients. Because of rubbing alcohol (isopropyl alcohol), we tend to think of alcohols as drying — and out of place in moisturizers. But some alcohols (octyldodecanol, for example) are excellent emollients.

Vitamins. Topical retinoic acid — a form of vitamin A — reduces fine lines and wrinkles in the skin by stimulating the production of collagen and is the main ingredient in prescription antiwrinkle creams. But the vitamin A used in some moisturizers is retinyl palmitate, which has the virtue of being a very stable molecule but isn't nearly as biologically active as retinoic acid. It's unlikely that retinyl palmitate in the amounts found in moisturizers has much, if any, effect on collagen and wrinkles. If retinyl palmitate has a benefit, it may be as a humectant.

Vitamin C, usually under the name ascorbic acid, and vitamin E, usually as tocopheryl acetate, are added because of their antioxidant properties. Studies of topical vitamin C have shown some effects, but in high concentrations. Doubts linger about its usefulness in moisturizers because light and oxygen inactivate the vitamin C. Vitamin E as tocopheryl acetate is biologically inactive and probably functions mainly as a preservative.

Menthol. Moisturizers that bill themselves as itch remedies like Sarna often contain menthol. Although menthol doesn't attack the underlying problem, the familiar cooling sensation does seem to cancel out the itching sensation.

Lactic acid. Skin over the heel can get especially thick, leathery, and dry. Try using a pumice stone or callus file to get rid of the outer layers of skin and then using a moisturizer like AmLactin to soften it up. AmLactin, an over-the-counter lotion, is 12% lactic acid, a heavy-duty humectant that can also loosen up adhesions so heel skin becomes more flexible and less likely to crack. Sometimes products containing lactic acid sting.