Fermented foods can add depth to your diet

Health benefits come from the live microbes that thrive in foods such as yogurt, kimchi, and sauerkraut. 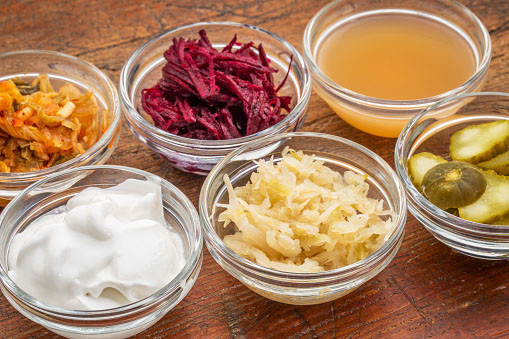 Pickles and sauerkraut might not be the first examples that jump to mind when you think of health foods. But a growing body of research shows that a diet that includes a regular intake of fermented foods can bring benefits.

Fermented foods are preserved using an age-old process that not only boosts the food's shelf life and nutritional value but can give your body a dose of healthful probiotics — live micro­organisms crucial to good digestion.

The digestive tract is teeming with some 100 trillion bacteria and other microorganisms, says Dr. David S. Ludwig, a professor of nutrition at the Harvard T.H. Chan School of Public Health. Research today is revealing the importance of a diverse and healthy intestinal microbiome (the microbial community in the gut) because it plays a role in fine-tuning the immune system and wards off damaging inflammation inside the body, which may lead to conditions ranging from obesity and diabetes to neurodegenerative diseases. "It's a very exciting, dynamic area of research," says Dr. Ludwig.

Future research will likely yield more clues about how the microbiome contributes to overall health. This may eventually enable scientists to pinpoint microorganisms that could target specific diseases or help people lose weight. Until that day comes, fermented foods are useful because they help provide a spectrum of probiotics to foster a vigorous microbiome in your digestive tract that can keep bad actors at bay, says Dr. Ludwig.

While research into the health benefits of fermented foods is relatively new, the process of fermentation has long been used to help foods last longer and keep them from spoiling. "Most societies throughout the world and throughout time have included fermented foods as part of their diet," says Dr. Ludwig. In colder, northern climates, fermenting foods allowed people to have vegetables throughout the long winter months when they otherwise wouldn't be available.

One of the earliest forms of food preservation, fermentation can extend the usability of a food for months. "For example, if you put cabbage on the shelf for a few weeks, it'll spoil," says Dr. Ludwig. "But if you ferment it into sauerkraut, it will last for months." It's the same concept with fermented dairy foods and proteins. "Think about how long milk lasts compared with cheese," he says.

In addition to helping food last longer, fermentation also enhances the taste of foods, giving them added complexity. Plus, the fermentation process works other forms of magic on foods, changing them and adding nutrients. For example, by eating fermented vegetables, vegetarians can get vitamin B12, which otherwise isn't present in plant foods, says Dr. Ludwig.

But one of the biggest benefits of fermented foods comes from probiotics. Recent research suggests that the type of gut bacteria in the bodies of Americans is changing. One possible reason is that the microbiomes in our bodies are not regularly replenished the way they were in past generations. That's because of changes in the American diet — particularly the rise in processed foods — and because of better hygiene, which cuts down on the number of microbes people are exposed to naturally through dirt and other contaminants, according to Dr. Ludwig. In addition, antibiotics are used widely and can kill off beneficial organisms along with the bad ones.

Changes to the population of gut microbes may create an imbalance between beneficial and harmful gut bacteria, leading to health problems. When the digestive tract has an unhealthy mix of organisms, it can actually lead to a weakening of the walls of the intestines, which start to leak their contents into the bloodstream — a condition referred to, not surprisingly, as leaky gut syndrome, according Dr. Ludwig. Chronic exposure to these substances leaking out from the intestines has been linked to a host of health problems, ranging from asthma and eczema to schizophrenia and Alzheimer's disease, he says. Fermented foods can bolster the gut microbiome, creating a healthier mix of microbes and strengthening the walls of the intestines to keep them from leaking.

If people eat probiotics (like those found in fermented foods) from early childhood, that can help train the immune system to tolerate — and cooperate with — a diverse, beneficial microbiome, says Dr. Ludwig. After the first few months and years of life, a person's microbe population is relatively stable, but adults who eat fermented foods regularly can still reap benefits.

Adding fermented foods to the diet is relatively easy, says Dr. Ludwig. You can find naturally fermented foods at natural-food stores and many supermarkets. And fermentation is also easy and safe to do at home by following some simple instructions.

But keep in mind that not all fermented foods are created equal. For instance, although cheese is fermented, it's not known to bring the same health benefits as yogurt. The difference is live microbes, says Dr. Ludwig. Yogurt has them; cheese typically doesn't.

Live cultures are found not only in yogurt and a yogurt-like drink called kefir, but also in Korean pickled vegetables (called kimchi), sauerkraut, and some pickles. The jars of pickles you can buy off the shelf at the supermarket are sometimes pickled using vinegar and not the natural fermentation process using live organisms, which means they don't contain probiotics. To ensure the fermented foods you choose do contain probiotics, look for the words "naturally fermented" on the label, and when you open the jar look for telltale bubbles in the liquid, which signal that live organisms are inside the jar, says Dr. Ludwig.

Yogurt might be the easiest fermented food for Americans to add to their diets, because they're already familiar with it. "But I encourage people to extend their range a little bit," says Dr. Ludwig. In addition to eating raw and cooked vegetables, add pickled vegetables as a side with dinner or topping a salad. Or toss a little sauerkraut into a sandwich or wrap. Another option is fermented soybeans, which are found in natto, tempeh, and miso.

If you're really adventurous, you can also try fermented fish, which are commonly eaten in some Northern and Asian cultures, but may be something of an acquired taste, says Dr. Ludwig.