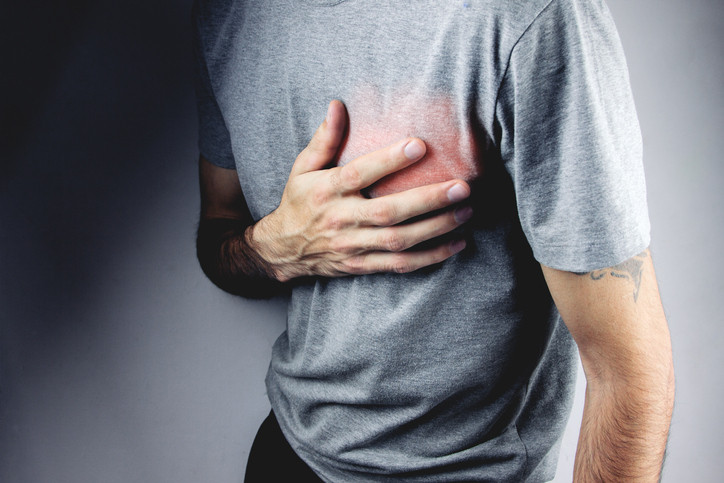 Coronary artery disease (CAD) is very rare in males too young to drive, but it begins to creep up after men are old enough to vote. In the U.S., the average age for a first heart attack in men is 65. That's why coronary artery disease is labeled a disease of senior citizens. But as many as 4% to 10% of all heart attacks occur before age 45, and most of these strike men. It's a reminder that men should not ignore warning symptoms just because they are "too young" to have heart disease. And since atherosclerosis can — and does — start in youth, it's a reminder that prevention should start early in life before problems develop.

Because CAD is the most important cause of early heart attacks, it deserves the most attention. But the other causes should also be considered. In broad numbers, about 4% of heart attacks in young adults are triggered by inborn abnormalities of the coronary artery anatomy. Five percent can be attributed to blood clots that originate elsewhere and are carried in the bloodstream to otherwise normal coronary arteries, where they block the artery. And in another 5%, various disorders of the blood clotting system increase the risk of clot formation throughout the circulatory system, including in coronary arteries.

A wide range of problems account for the remaining 6% of heart attacks in young adults. They include spasm or inflammation of the coronary arteries, radiation therapy for chest tumors, chest trauma, and abuse of cocaine, amphetamines, or other drugs.

Each of these problems is tragic in its own right. But because it's both common and preventable, atherosclerosis is the greatest tragedy of all.

Doctors usually explain atherosclerosis as "hardening of the arteries," but it's actually much more complex. Thanks to the ancient Greeks, the name itself conveys some of that complexity: athere is Greek for "porridge," while sclerosis means "hardening." In fact, atherosclerosis begins with deposits of soft, fatty material; only later does this mush build up in plaques that narrow the artery and stiffen its walls.

Atherosclerosis begins in the blood, not the arteries. Excess amounts of LDL, the "bad" cholesterol, enter the inner lining of arteries, gradually building from tiny crystals into larger deposits that are visible as fatty streaks. Arteries damaged by smoking, high blood pressure, or diabetes are particularly vulnerable. Reducing LDL cholesterol levels, lowering blood pressure, keeping blood sugar levels in the normal range, avoiding tobacco can also help — but without help, the fatty streaks may slowly enlarge into plaques.

Early plaques are still small and soft. White blood cells called macrophages gobble up cholesterol, but instead of containing the damage, they add fuel to the fire by triggering inflammation. As things progress, the muscle cells in the artery wall enlarge, and the plaques grow into partial blockages.

Larger, mature plaques develop fibrous caps. These stable plaques can cause the chest pain called angina, but they don't usually trigger heart attacks. However, smaller, younger plaques that are unstable can rupture. Blood clots form on the ruptured plaques, as the body makes another attempt to contain damage. As in the case of inflammation, though, the body's defense turns into offense: the clot completely blocks the artery, depriving a portion of the heart muscle of oxygen-rich blood. That's what kills muscle cells and produces a heart attack.

Heart attacks are swift, occurring in a matter of minutes. But atherosclerosis itself is slow, developing over years — and it often begins in childhood.

To study the origins of atherosclerosis, scientists from 15 medical centers formed the Pathobiological Determinants of Atherosclerosis in Youth (PDAY) research group. Over a 7-year period, they investigated cardiovascular risk factors and atherosclerosis in 2,876 people between the ages of 15 and 34; about three-quarters were male. All were victims of accidents, homicides, or suicides who had been autopsied shortly after death. The researchers looked for evidence of atherosclerosis, reviewed the victims' medical records, and analyzed blood specimens to measure cholesterol levels and detect thiocyanate, a chemical indicator of smoking.

The results were striking, particularly for the male subjects. Fatty streaks of atherosclerosis were identified in coronary arteries as early as age 15 and became progressively more prevalent over the 20-year age span covered by the study. In all, about 2% of the youngest males and 8% of the oldest had evidence of coronary artery disease. As expected, subjects who'd had the highest LDL cholesterol levels, lowest HDL cholesterol levels, highest blood pressures, and highest blood sugars had the most disease. Even in these adolescents and young adults, smoking and obesity also increased the risk of atherosclerosis.

In 2007, a team of scientists from the U.S., U.K., and Australia reviewed 18 studies of birth weight and subsequent heart disease. In all, the analysis evaluated over 7,500 heart attacks in more than 147,000 individuals. The researchers concluded that low birth weight increases the risk of heart disease later in life; in round numbers, a difference of one pound at birth accounts for a 5%–10% change in risk over the course of a lifetime. Low birth weight is also associated with an increased risk of stroke in adulthood.

Doctors don't know how a baby's weight at birth affects his risk of atherosclerosis decades later. Poor maternal nutrition is one possibility; others include low socioeconomic status and maternal smoking. Whatever the root cause, babies born small have an increased risk of developing high blood pressure, insulin resistance, and high cholesterol in childhood. Rapid catch-up weight gain in infancy and childhood adds to the risk.

Good maternal health might reduce the burden of heart disease and stroke in adults. And attention to heart disease risk factors in children and adolescents is even more likely to help.

The lion's share of heart disease in young adults is caused by the same risk factors that cause coronary artery disease in older men. The culprits include a family history of heart disease, smoking, high cholesterol, hypertension, abdominal obesity, diabetes, the metabolic syndrome, lack of exercise, hostility, and elevated levels of C-reactive protein.

The Coronary Artery Risk Development in Young Adults (CARDIA) study put some of these risks into perspective. The researchers evaluated over 5,000 young adults age 18 to 30, then monitored them for up to 15 years to find out how their risk factors influenced coronary artery calcifications, as detected by CT scanning. Smoking 10 cigarettes a day increased the likelihood of CAD by 50%; each 30 mg/dL rise in LDL cholesterol increased risk by 50%; each 10 mm Hg rise in systolic blood pressure increased risk by 30%; and each 15 mg/dL rise in blood sugar levels increased risk by 20%.

Scientists know that many factors increase the risk of heart disease; unfortunately, though, a lot of young adults are clueless. A survey of more than 4,000 healthy individuals with an average age of 30 found that over 65% were unable to identify any of the six major cardiac risk factors.