Could it be my thyroid?

Your thyroid is a small, butterfly-shaped gland which weighs less than an ounce. It perches unobtrusively with its wings wrapped around the front of your windpipe (trachea), below your voice box (larynx). Despite its slight size, your thyroid controls the rate at which every cell, tissue, and organ in your body functions, from your muscles, bones, and skin to your digestive tract, brain, heart, and more. It does this primarily by secreting hormones that control how fast and efficiently cells convert nutrients into energy—a chemical activity known as metabolism—so that the cells can perform their functions. 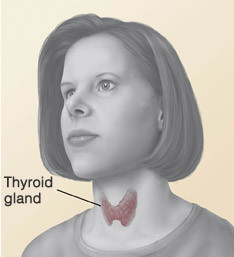 How the thyroid gland works

Just as your car engine can't run without gasoline, your thyroid needs fuel to produce thyroid hormone. This fuel is iodine. Iodine is found in such foods as iodized table salt, seafood, bread, and milk. When you eat these foods, the iodine passes into your bloodstream. Your thyroid then extracts this necessary ingredient from your blood and uses it to make two kinds of thyroid hormone: thyroxine, called T4 because it contains four iodine atoms, and triiodothyronine, or T3, which contains three iodine atoms. The thyroid's output consists primarily of T4. Most of the T3 the body needs is created outside the thyroid in organs and tissues that use T3, such as the liver, kidneys, and brain. These tissues convert T4 from the thyroid into T3 by removing an iodine atom.

As the thyroid produces thyroid hormone, it stores it in a vast number of microscopic follicles. When the body needs thyroid hormone, the thyroid secretes it into your bloodstream in quantities needed for the metabolic needs of your cells. The hormone easily slips into cells and attaches to special receptors.

Your car engine burns fuel, but it is you who tells it how hard to work by stepping on the gas pedal. The thyroid also needs to be told what to do. It takes its orders from your pituitary gland, located at the base of your brain. No larger than a pea, the pituitary is sometimes known as the "master" gland, because it controls functions of the thyroid and other glands in the endocrine system. The pituitary gland signals the thyroid to tell it how much hormone to make. The messages come in the form of thyroid-stimulating hormone (TSH). TSH levels in your bloodstream rise or fall depending on whether there is enough thyroid hormone in your system. Higher levels of TSH prompt the thyroid to produce more hormone, until TSH levels come down to a constant level. Conversely, low TSH levels signal the thyroid to slow down production.

Normally, the thyroid doles out just the right amount of hormone to keep your body running smoothly. TSH levels remain fairly constant, yet they respond to the slightest changes in T4 levels, and vice versa.

But even the best network is subject to interference. Outside influences—such as disease or certain medicines—can break down communication. When this happens, the thyroid might not produce enough hormone, slowing down all of your body's functions, a condition known as hypothyroidism or underactive thyroid. Or your thyroid could produce too much hormone, sending your systems into overdrive, a condition known as hyperthyroidism, or overactive thyroid.

Signs and symptoms of an underactive thyroid

The symptoms and course of hypothyroidism are quite variable. One person may become hypothyroid quickly over a few months, while another develops symptoms slowly over many years, making the condition even more difficult to detect. Generally speaking, the lower thyroid hormone levels fall, the more pronounced symptoms will be. Still, a person with severe disease might not experience severe symptoms. This is particularly true among older people. Following is a list of classic symptoms.

Signs and symptoms of an overactive thyroid

The symptoms of hyperthyroidism tend to come on slowly and also vary from person to person. It's not always obvious that symptoms such as excess thirst or increased appetite are an indication that something is wrong. Often, people don't see a doctor until they experience palpitations or shortness of breath.