Basal cell carcinoma, also called epithelioma, is the uncontrolled growth of the skin's basal cells. These are the cells that line the deepest layer of the epidermis, the skin's outermost layer. This type of cancer rarely spreads to other parts of the body. 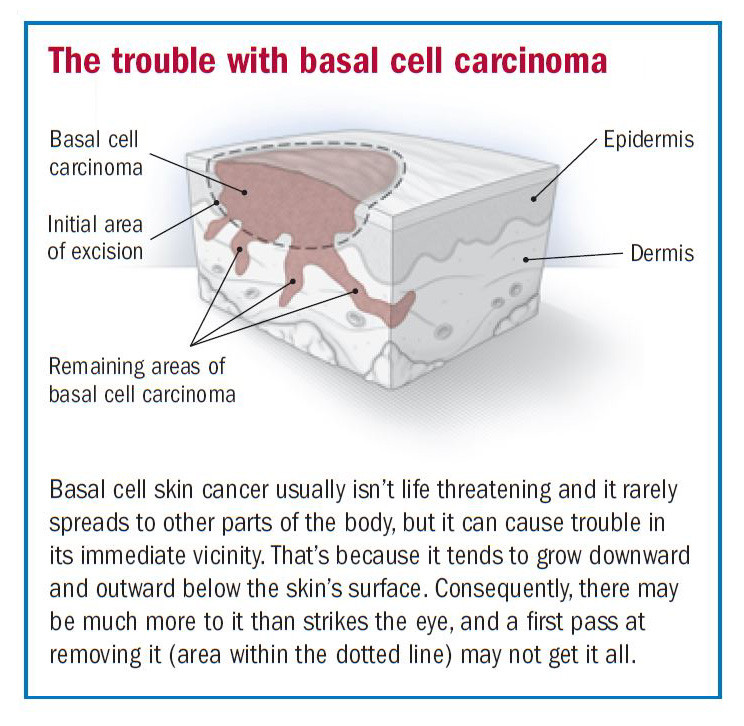 It is mainly caused by repeated long-term exposure to sunlight. Light-skinned people who spent a lot of time in the sun as children, or who spend time in tanning booths, are especially susceptible. X-ray treatments for acne and exposure to industrial pollutants such as arsenic and hydrocarbons also increase the risk of developing basal cell carcinoma.

Basal cell carcinoma is the most common skin cancer in the United States, with nearly 3 million cases diagnosed each year.

Basal cell carcinoma usually begins as a painless bump or nodule that grows slowly. Later, it becomes an open ulcer with a hard edge. Nearly 90% of basal cell carcinomas occur on the face, but they can appear on any part of the body that is sometimes exposed to the sun—the face, ears, neck, back, chest, arms, and legs.

Although basal cell carcinoma almost never spreads to other organs and is rarely fatal, it can invade surrounding tissue and be disfiguring if not treated.

Basal cell carcinoma is curable, but prevention — not getting too much sun — is the best medicine. Use sunscreen or sun-filtering clothing, and wear a hat.

Your doctor can diagnose basal cell carcinoma by examining your skin and performing a biopsy.

Basal cell carcinomas must be removed. Methods include

A painstaking procedure called Mohs surgery minimizes the amount of tissue removed. It is often performed when the cancer is located in the skin folds around the nose, at the corners of the eyes, and around the ears.