Zombie apocalypse? Only in your dreams 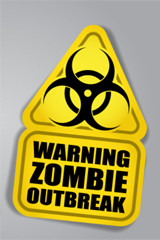 It’s Halloween—a time when we’re preoccupied with witches, ghouls, and other frightful creatures. But this year, no creature is generating as much buzz as the zombie. Zombies have inspired movies and TV shows, video games—even a bloody Pride and Prejudice takeoff.

Could all this talk of the undead be foreshadowing a real-life zombie apocalypse? In fiction, yes. But not in real life.

In the 1980s, Harvard University ethnobotanist Wade Davis uncovered a potential medical explanation for cases of zombie-like living deaths in Haiti. A neurotoxin found in animals like the pufferfish created the appearance of death—minus the permanence. Davis described his findings in a book, The Serpent and the Rainbow, which horror director Wes Craven later turned into a movie.

Toxins might be fine for creating a couple of zombies, but to launch any type of apocalyptic scenario there must be an infective agent and an efficient route of transmission. So far, the prion is the only agent that causes anything remotely related to zombieism. Prions are oddly shaped proteins that cause abnormal folding of proteins in the brain. Essentially, they turn the brain’s centers of higher thought into spongy mush.

Prions were behind a disease called kuru, which once infected members of a cannibalistic New Guinea tribe. They got it from eating human brains. People with kuru exhibit symptoms like poor coordination, personality changes, loss of speech, and open sores. Sound familiar? (Prions are also responsible for the more widespread animal infection known as mad cow disease.)

Here’s the transmission pattern found in most zombie tales: zombie bites human, human dies, then human—who is no longer human but zombie—rises from the grave and starts looking for more flesh to gnaw on. If we’re trying to follow medical logic, people don’t die and come back from the grave. So how might a real-world zombie pandemic spread?

Dr. Steven Schlozman, a zombie enthusiast and professor of psychiatry at Harvard Medical School, came up with a scenario in his 2011 novel, The Zombie Autopsies. He imagined a scenario that turns normal human beings into flesh-craving monsters. (The book will soon be made into a movie by George Romero, who wrote, directed, and produced the classic zombie film “Night of the Living Dead.”)

In Dr. Schlozman’s book, warped scientists attach a prion to an airborne, influenza-like virus. It doesn’t take more than a few sneezes and coughs to produce a full-on zombie pandemic that efficiently wipes out two-thirds of the world’s population. True to his medical roots, Dr. Schlozman gave the hypothetical disease a complicated name and an acronym: ataxic neurodegenerative satiety deficiency syndrome (ANSD). It describes the brain erosion, stumbling walk, and insatiable hunger that afflict the infected. The prion destroys most of the brain, but leaves just enough working tissue behind to let the humans-turned-zombies walk (albeit in a highly uncoordinated way). It also interferes with the hypothalamus—the part of the brain that regulates feelings of hunger, which explains the insatiable need for flesh. “They just stumble into whatever they can and take a bite,” Dr. Schlozman says.

Although a pandemic that creates zombie-like symptoms is theoretically possible, a real-life zombie apocalypse shouldn’t be high up on our list of worries, says Dr. Schlozman.

“What I always say is we’re humans, so we have plenty of ways to do ourselves in without zombies,” he says.

But if you are the type of person who likes to be prepared for everything, the CDC offers a handy (tongue-in-cheek) zombie apocalypse preparedness guide. It recommends coming up with an emergency plan and stocking up on water, food, medications, and other necessary supplies. If the apocalypse never actually transpires, at least you’ll be ready for any real emergencies that come your way.

Just in time, great post Stephanie. Are there Medicare Benefits for Zombie attacks?

Excellent advice that is useful to everyone!.you can get more information from animals service also

Now i know how to prevent it. Thanks a lot for this article

Just in time, great post Stephanie. Are there Medicare Benefits for Zombie attacks?