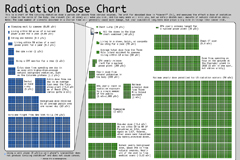 Over the past three weeks, we have been inundated with numbers and estimates of risk posed by radiation from the earthquake-damaged Fukushima Daiichi nuclear power plant in Japan.

It can be hard to put this risk into perspective. My colleague Peter Wehrwein has done it with words. If pictures or sounds help you absorb complex information, here are three good resources for understanding radiation risk:

A cartoonist named Randall Munroe who blogs at blag.xkcd.com has put together a terrific illustration that visually explains radiation exposures and risks. (The image above is just part of the chart.) Beginning with tiny boxes representing the smallest radiation exposure—sleeping next to someone, or 0.05 millionths of a sievert—Munroe builds up to a fatal dose of 8 sieverts, and shows a lot in between. (A sievert—abbreviated sV and pronounced SEE-vert—is a measure of the biologic effect radiation has on people and the possible harm it can cause.)

Adam Ragusea, a reporter and associate producer for Radio Boston, took Munroe’s chart and translated it into sound. Radio Boston airs on WBUR, one of Boston’s public radio stations.

Another excellent visual representation of the possible harm caused by different doses of radiation comes from Ellen McManis, a senior reactor operator for the Reed Research Reactor, which is owned and operated by Reed College in Portland, Oregon.