One of the most abundant substances in the cloud of radioactive steam released by a failing nuclear power plant is iodine-131—a radioactive form of the element, iodine, that is found throughout nature. Iodine-131 poses a special health risk because of its cancer-causing effect on the thyroid gland. 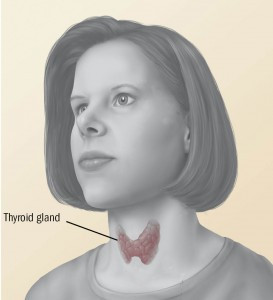 The small, butterfly-shaped thyroid sits just below the voice box. From this perch, it controls how fast every cell in the body changes food into energy. The gland’s main product, thyroid hormone, governs the function of the digestive tract, brain, heart, nerves, muscles, bones, skin, and more.

Iodine is a key ingredient that goes into making thyroid hormone. We get this element from ocean-caught or ocean-farmed fish and shellfish, milk, cheese, yogurt, eggs, and fruits and vegetables grown in iodine-rich soil.

The human body is surprisingly good at absorbing iodine and storing it in the thyroid gland. That’s a problem when iodine-131 is released into the atmosphere. The thyroid stores it as readily as natural, non-radioactive iodine. As iodine-131 builds up in the thyroid gland, it emits bursts of radiation that can damage DNA and other genetic material. Such damage can remove the normal limits to cell growth and division. Unchecked growth of thyroid tissue is thyroid cancer.

Iodine-131 gets into the body several ways. A person can breathe in radioactive steam released by a nuclear power plant. Fallout—radioactive particles that fall out of the atmosphere and settle onto plants, soil, and water—further adds to the burden when a person eats iodine-131 enriched fruits and vegetables or drinks water containing the isotope. Milk is another vehicle—cows that eat grass sprinkled with iodine-131 make milk that contains it.

Following the explosion and meltdown of the nuclear reactor at Chernobyl in 1986, follow-up health studies showed a significant increase in thyroid cancer in the area around Chernobyl, especially among children who were under 10 years old at the time of the explosion and those in utero. Youths may be most affected by iodine-131 because their thyroid glands are still growing and developing. Fortunately, as cancers go, thyroid cancer is one of the least deadly. In the United States, only about 5% of people who develop thyroid cancer die of the disease. (Researchers aren’t yet sure if this applies to radiation-induced thyroid cancer.)

As my colleague Peter Wehrwein describes in a related post, taking potassium iodide pills can help keep iodine-131 from taking up residence in the thyroid gland. The seafood-rich Japanese diet provides an abundance of iodine. Because the thyroid glands of those affected by fallout from the failing nuclear power plants may be “full” of natural iodine, iodine-131 may not be able to get into the gland, giving them natural protection against radiation-induced thyroid cancer.