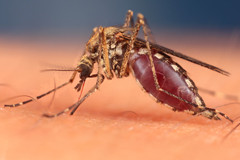 The United States is in the midst of the largest outbreak of West Nile virus since it was first discovered here in 1999, the Centers for Disease Control and Prevention announced this week. So far this year, more than 1,100 cases of human West Nile infection have been reported, about half of them in Texas, and at least 40 people have died from the virus. More cases are expected, since West Nile virus infections generally peak in late August and September.

“We’re in the midst of one of the largest West Nile outbreaks ever seen in the United States,” said Dr. Lyle Petersen, director of the CDC’s mosquito-borne illness programs, during a press conference to discuss the West Nile outbreak.

Experts can only speculate about the reasons for this dramatic increase in cases. It probably has some relation to the record warm temperatures this past winter and spring. And this was followed by a very hot early summer. The breeding cycles of mosquitoes speed up in hotter weather. Also the virus seems to replicate faster in warmer temperatures.

What is West Nile virus?

West Nile virus, first discovered in Uganda in 1937, has since spread to many parts of the world and almost every state in the U.S. The virus is transmitted to humans by mosquitoes. Mosquitoes pick it up by feeding on birds carrying the virus. Very rarely, West Nile virus infection occurs due to transfusion of infected blood. It can’t spread from human to human by casual contact.

Most people bitten by a mosquito carrying the West Nile virus won’t get sick. First, the virus has to get from the mosquito’s salivary gland into the person’s blood. Even then, 3 in 4 people fight off the virus. When symptoms do occur, they start three to 15 days after the mosquito bite. The symptoms almost always resemble a mild case of the flu, with fever, headache, and body aches.

People over age 50 and those with altered immune systems have a higher risk of developing severe problems from the virus.

None of the antiviral drugs currently available kill West Nile virus. And no vaccine is available. In some communities where the West Nile virus is discovered, spraying programs are used to kill mosquitoes.

You can do two things to prevent infection: guard yourself and your family, and wage your own personal battle against mosquitoes:

You can read more about West Nile virus on the CDC’s West Nile and Stop Mosquitoes pages.

Thanks for providing very good information , I like it.

This Is A Very Scary Thing That This West Nile Virus Is That Bad In The USA.
Hopely Something Is Done About This In The USA

Eat lots and lots of garlic, not pill form, raw garlic anyway you can get it down (might not have a lot of friends.

I agree. I have eaten more raw garlic in the last 3 years than most eat in a lifetime. It, in my opinion, ia the greatest food on the face of the earth, especially when it comes to prevention of health issues.

Any disease that is viral, bacterial, or fungal based has a very good chance (Not 100%) of being controlled or beaten with large amounts of raw garlic.

I sometimes smell so bad, I try to run away from myself!

And don’t live near foreclosed houses where bank owners have failed to maintain abandoned swimming pools.