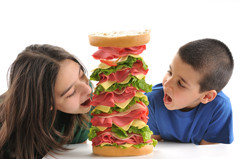 An army of nutrition experts is constantly reminding us that most fast food is bad for health. But they’re not around to back you up when your children or grandchildren unleash powerful weapons of cuteness to convince you to stop at a fast-food chain. It’s hard not to give in when the ones you adore put on the pressure, even when they’re older.

Case in point: my son, who is majoring in economics in college, recently informed us that he could reduce his expenses at school by 32% if he could eat at fast food restaurants daily and ditch the dorm meal plan. While I was impressed by his math skills and economic reasoning, I warned him that fast food often could lead not only to weight gain but also to other medical problems. Then I resorted to my own weapons: the latest research. Knowledge is power, after all, and two new studies gave me the confidence to hold my ground. They may work for you, too.

One study, published online in the journal Thorax, looked at possible connections between consuming different types of food and the development of asthma, rhinitis (chronic stuffy nose) and eczema, a skin condition. The researchers surveyed 500,000 kids from 31 countries in two age groups: ages 6 to 7 and ages 13 to 14. In both groups, kids who ate fast food three times a week or more had increased risks of asthma, rhinitis, and eczema—as much as a 39% increase in severe asthma risk for teens and 27% for younger kids. And wouldn’t you know—just three or more servings of good old fruit appeared to reduce the severity of symptoms for all three conditions.

Another study, published in this month’s Archives of Pediatrics and Adolescent Medicine, found that teenagers and kids consumed far more calories in fast-food and other restaurants than they did at home. The numbers were alarming: eating out was associated with taking in as many as 160 extra calories daily for younger kids and as many as 310 calories daily for teens. That information is troubling because obesity is a serious problem for children in the U.S. and around the world.

Potential weight gain is just one consequence of eating out often. Fast and restaurant foods are often heavy on fat and sugar, both of which can lead to the development of chronic disease when consumed in large quantities.

So what’s a parent or grandparent to do? I turned for advice to Stacey Nelson, a registered dietitian who is a clinical nutrition manager at Harvard-affiliated Massachusetts General Hospital. She says it’s not realistic to ban children from eating out, but to be careful when you choose to do so. “Fast food is not health food and never will be, so the idea is never to make it a habit. But when it seems like that’s all that is available, there are always ways to make the best of a less than ideal situation,” she told me.

Here are some of Nelson’s top tips:

Most fast-food and other restaurants offer many dining options, some of which are better than others. For example:

In other words, look at the nutrition information that many restaurants make available these days and make choices with fewer calories and less saturated fat and sugar.

Kids won’t necessarily cotton to these rules. Choosing—or avoiding—fast food will be a matter of negotiation. But what part of parenting and grandparenting isn’t? We negotiate bedtimes and homework and playtime. Food choices shouldn’t be any different.

I employed this tactic myself when I spoke with my son about eating fast food daily. I told him about the risks of these foods, then laid down the law: Stick to the college meal plan and indulge in fast food only once in a while, using his own allowance. I was happy to hear him agree enthusiastically. It was a little surprising, actually—until I heard his next economic discovery. He said that if he didn’t spend his allowance eating out, he’d be able to save up for a fabulous spring-break trip to Mexico. I’ll let you know when I’ve figured out how to negotiate that deal!

I like the tips given in this article. GREAT! Keep the good work flowing.

Most allergies develop due to poor eating habits. Healthy eating is always better.

Children these days fall for junk food and fill their stomach. Parents should insist on healthy eating habits from early childhood. Thanks

Is is more important information who suggested by many researches where by taking the junk food either by you or for your children may leads to arthritis and heart problems too.

It is rally good to the have facts when it comes to nutrition and eating healthy. It’s a fact that Junk food has the greatest scope for causing many health problems.

Yes, it is important to think about health of your kids, when they want to eat fast food. Many kid’s doctors give advise through on-hold messaging to the parents for their kids. It is best service to give suggestions and advise and any message to anyone without wasting time.

Junk food / fast food is the greatest scope of being fatty with cholesterol. which can be lead to arthritis and heart problems too. with high calories bring so many problems with it.
As your post is so important and showing such a nice information and every parents should take lesson from it.
Once again thanks for the nice post.

It’s so good to the have solid facts when it comes to nutrition and eating healthy. Knowing that fast food is causing asthma and other conditions is a darn good reason to cut out the crap and start hitting up the farmer’s market for your food.

I agree. This seems like a helpful tool for any parent whose kids are being bombarded with fast food options that are fast and easy. We should take the time to teach them lessons of nutrition and be a good example by not taking the easy route with fast food!

Love it!
To the point, articulate and very interesting,
Thanks