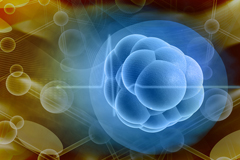 Sometimes, the Nobel Prize in Physiology or Medicine is awarded for a discovery or invention that already is improving the practice of medicine and saving lives, like the invention of magnetic resonance imaging (MRI) scans. Sometimes it is awarded for very basic research that might someday affect medical practice and human health, but for now is just really important to understanding how biology works. Such is the case with this year’s prize, which was awarded yesterday to Sir John Gurdon of Great Britain and Dr. Shinya Yamanaka.

If I had to put into one sentence the message of this year’s Prize, it would be this: our cells are a lot smarter and more flexible than we once imagined, and capitalizing on that fact could greatly improve the treatment of many human diseases.

First, some background. Each of us begins with the fusion of an egg and a sperm, which form a single cell. That one cell multiplies into trillions of cells. But the cells don’t just multiply. They also diversify. The primitive cells in first days of life can change into the many different types of specialized cells that we need. Some become cells in the eye that see light. Others become cells in the stomach that make acid. Others become skin. Each type of cell looks different and acts different, yet each has exactly the same genes inside it.

Gurdon had made a clone, an exact genetic replica, of Frog A—just younger. He had shown that the genes in the nucleus of a specialized adult cell could be coaxed back into becoming an unspecialized, primitive cell, and that the primitive cell could become a young animal that grew up to become an adult, full of specialized cells. Gurdon had started the cycle of life all over again. He had turned back the clock—at least, in a frog. Very few people believed that anything like this could be done in humans.

Fast forward to the early 21st century. Human embryonic stem cells had been discovered. In the test tube, they could be turned into many different types of specialized cells. That was exciting, because many diseases involve the death of cells. What if you could replace the dead cells with new cells made from embryonic stem cells?

While the prospect was exciting, there were two big problems. First, many people had serious ethical concerns about using stem cells taken from human embryos. Second, if you needed new cells—new heart muscle cells to replace cells killed by a heart attack, for example—they would have to come from an embryo that was genetically different from you. That meant that your immune system would attack those foreign heart muscle cells.

What you really would like were heart cells made from your own embryonic stem cells. Unfortunately, the embryo that was you is, of course, long gone, and you can’t turn back the clock.

Humans have about 21,000 genes. To his great surprise, Yamanaka found that a handful were turned on in stem cells but not in many different types of specialized cells. That first great question had led to a major discovery, but it was the audacious second question that really struck gold.

You could. Yamanaka created cells very much like embryonic stem cells, called induced pluripotent stem cells (iPS). Scientists quickly showed that you could create for mice their own iPS cells, and that these cells could then go on to cure diseases—for example, mouse equivalents of sickle cell disease and Parkinson’s disease.

Of course, much more study of these iPS cells is necessary before they are considered for the treatment of human diseases. Most scientists I know think that the hopes for these cells will be realized, although they’re not sure about how soon.

The 2012 Nobel Prize in Medicine, like many before it, demonstrates that people with the curiosity and courage to ask what appear to be ridiculous questions, and a society that supports their work, can change our world for the better.