Statin use is up, cholesterol levels are down: Are Americans’ hearts benefiting?

Baseball fans have the Baseball Prospectus annual. Political junkies can get their fix from Nate Silver’s 538 blog.

For those of us with geeky interest in health and medicine statistics, graphs, and charts, the Health, United States, 2010 report from the National Center for Health Statistics is that kind of treat. The 41 charts and graphs and 148 trend tables in the 2010 report (it’s dated 2010 but was released earlier this year) could keep me happily occupied for hours.

One graph that really caught my eye shows the percentage of Americans that take a statin. Statins are prescribed mainly to lower “bad” LDL cholesterol, but they may have other benefits, too. The statins include atorvastatin (sold as Lipitor), rosuvastatin (sold as Crestor), and simvastatin (sold as Zocor but also available as a generic ).

Here is the graph I am talking about: 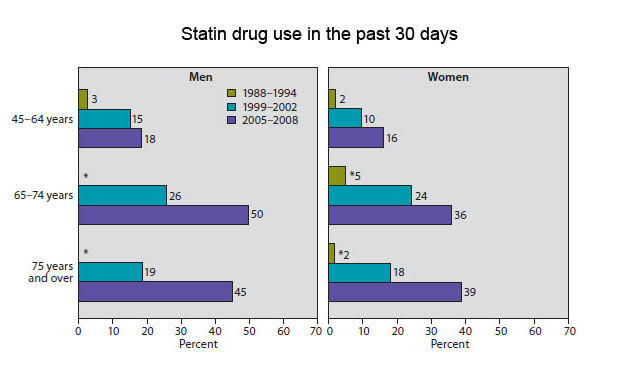 Many Americans take statins. No surprise there. But half of men, ages to 65 to 74, and 39% of women, ages 75 and older—that’s pretty stunning.

Combine the 45+ age groups and both genders, and it comes out that one in four Americans, ages 45 and older, are taking a statin. There are roughly 127 million Americans over age 45. Presuming that there hasn’t been a big drop off in use since 2005-2008 (the latest period for the government health survey upon which these statistics are based) almost 32 million Americans take a statin. That’s the equivalent of the entire populations of Florida and Illinois combined.

Here is another chart from Health, United States, 2010 that suggests that all those statins may be having the intended effect: 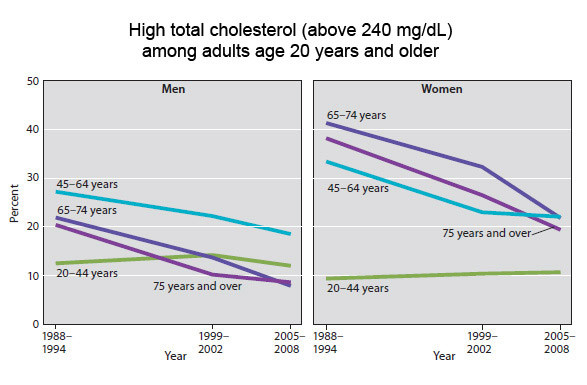 The trend lines for men and women between 20 and 44 aren’t so hot. But for other age groups, cholesterol levels are headed in the right direction. Sure, changes in diet may be a factor. But widespread use of statins has undoubtedly helped with the downward slope.

Now let’s cue up a couple of graphs that show the trends in death rates from heart disease (and other causes).

First, the one that shows the death rates for Americans 45 to 64: 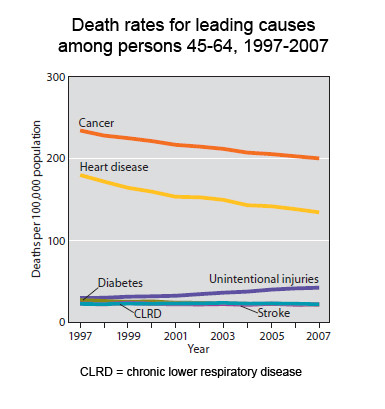 And now the one for Americans ages 65 and over: 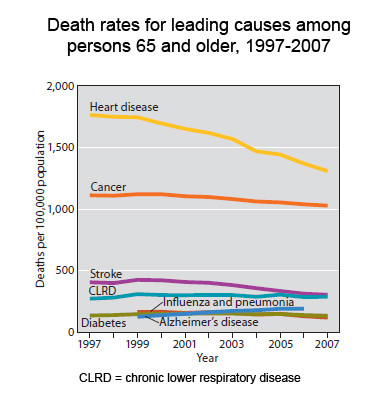 Of course, heart disease death rates have fallen for a whole host of reasons, some of them overlapping. Fewer Americans smoke. Treatment of heart disease has improved. Emergency treatment of heart attacks is swifter. The American diet is better for the heart than it used to be, at least in some respects. But lower cholesterol levels also belong on the list of positive influences and along with them, statins.
It’s hard to beat a statin if the goal is lowering your LDL. If you take the pills as prescribed, LDL levels typically decrease by about 30%.

But there are alternatives. My colleague, Pat Skerrett, editor of the Harvard Heart Letter, has written a great piece about the 11 foods that lower your cholesterol. And I wrote an article for the Health Letter a few years ago about ways to manage common problems, such as cholesterol, without taking medication.