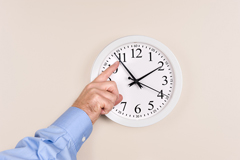 This weekend, most Americans will follow the annual ritual of setting their clocks ahead one hour—and lose an hour of sleep in the process. We pay for it on Monday.

According to sleep expert Dr. Charles Czeisler, U.S. researchers have seen increases of 6% to 17% in motor vehicle crashes on the Mondays after we set our clocks forward. Data collected over a 20-year period in Sweden shows a 5% increase in heart attacks during the week that follows the start of Daylight Saving Time.

Czeisler, who is chief of the Division of Sleep Medicine at Brigham and Women’s Hospital in Boston, was speaking on a Webcast called “Fighting the Clock: How America’s Sleep Deficit is Damaging Long-term Health,” produced by the Harvard School of Public Health.

Panelist Frank Hu, professor of nutrition and epidemiology at Harvard School of Public Health, explained that people who are sleep deprived tend to have less healthy diets than those who get enough sleep. Work by Hu and others has also linked sleep deprivation to obesity and type 2 diabetes.

A fourth panelist, Dr. Susan Redline, professor of sleep medicine at Harvard Medical School, called sleep a “complex neurophysiologic process” that enhances learning and memory and restores and rejuvenates the brains. Unfortunately, at least 30% of adults and 70% of adolescents don’t get enough sleep at night.

Sleep deprivation doesn’t just make us groggy. In adults, not getting enough sleep on a regular basis increases the chances of developing diabetes and heart disease. In children, it can lead to doing poorly in school, behavioral problems, prediabetes, obesity, and high blood pressure, said Redline.

If you are interested in sleep and the long-lasting effects of not getting enough sleep, the “Fighting the Clock” Webcast is definitely worth watching.

As for this weekend, you can try to recoup the lost hour by going to bed earlier, sleeping later, or taking a nap. And be careful driving on Monday!