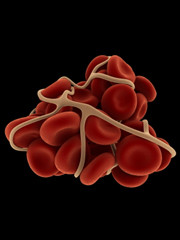 Millions of people depend on the blood thinner warfarin to prevent clots from forming in their blood. It’s an important drug, but tricky to use. One problem with warfarin (Coumadin, Jantoven, generic) is that it interacts in potentially harmful ways with other medications. Two problematic types are antibiotics and antifungal agents. As we write in the June issue of the Harvard Heart Letter, this isn’t just a problem with pills, but can also happen with ointments, creams, and suppositories.

Warfarin interferes with the ability of blood cells called platelets to stick to each other. That’s an important first step in clot formation. Such clots can lead to heart attack, stroke, and other damaging or deadly health problems. People prone to forming blood clots include those with the heart-rhythm problem called atrial fibrillation, anyone with an artificial heart valve, those who have had blood clots in a leg (deep-vein thrombosis) or lung (pulmonary embolism), and others.

Adding an antibiotic such as cotrimoxazole, cephalexin, or penicillin, or an antifungal medicine such as itraconazole or ketoconazole on top of warfarin can heighten warfarin’s blood-thinning ability. This raises the risk of internal bleeding or sustained bleeding after an injury.

Among people taking warfarin and one of these medications, “the risk of gastrointestinal bleeding increases, and a bump on the head could become a bleed in the brain,” says Dr. Tejal Gandhi, associate professor of medicine at Harvard Medical School and an expert on outpatient drug safety.

Because it is difficult to predict how an antibiotic or antifungal medication will affect warfarin in an individual, it’s important to work extra closely with health care providers in this situation.

If you take warfarin and develop an infection for which one of your doctors prescribes an antibiotic or antifungal medication, tell that doctor you are taking warfarin. Also tell the doctor or nurse overseeing your warfarin about the new medication. Then make sure that one of these health professionals checks how long it takes your blood to clot (a test called the INR). If it indicates that your blood is taking too long to clot, a smaller dose of warfarin may be needed.

(Click here to read the full article in the June 2012 Harvard Heart Letter.)