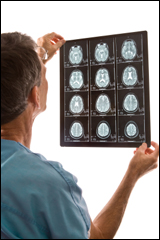 The symptoms of a stroke are sometimes obvious, like numbness or weakness on one side of the face, trouble speaking, difficulty walking, and vision problems. Some strokes, though, pass completely unnoticed—at least right away. But as reported in the June issue of the Harvard Women’s Health Watch, the damage these so-called silent strokes cause to fragile brain tissue can have significant and lasting effects on memory.

During a typical ischemic stroke, a blood clot blocks a blood vessel that feeds part of the brain. Without a steady supply of blood, cells in that area malfunction and may die. Symptoms that appear reflect the functions that were controlled by the affected part of the brain. A hemorrhagic stroke caused by a burst blood vessel does the same thing.

During a silent stroke, the interruption in blood flow occurs in part of the brain that doesn’t control any vital functions. Although it doesn’t cause any obvious symptoms—most people who’ve had a silent stroke have no idea it occurred—the damage does show up on an MRI or CT scan.

Silent strokes could interrupt the flow of information in the brain needed for memory, especially if several of them occur over time. Damage from silent strokes can accumulate, leading to more and more memory problems.

“The more brain damage or injury that you have due to these silent strokes, the more difficult it is for the brain to function normally,” says Dr. Karen Furie, director of the Massachusetts General Hospital Stroke Service and an associate professor at Harvard Medical School.

Being proactive about stroke prevention

If a stroke comes without any symptoms and it can only be seen on an MRI or CT scan, what, if anything, can you do about it?

Here are some key ways to lower your chances of having a stroke, silent or otherwise. (You can read more about each in the full article online.)