I’m a big fan of British television. One thing I’ve noticed over the years is how much the characters enjoy their liquor. From watching Downton Abbey‘s Lord Grantham, MI-5‘s Section D chief Harry Pearce, and Grantchester‘s country vicar Sidney Chambers, it’s clear that the preferred way to end a day overseeing the manor, short-circuiting a terrorist plot, or comforting troubled souls is pouring two fingers of a fine whiskey. And men aren’t the only imbibers. Habitual tippling forced Prime Suspect‘s DCI Jane Tennison into early retirement from Scotland Yard.

These fictional Britons mirror the British population. In the United Kingdom, average annual consumption of pure alcohol is 10 liters per person. That’s the equivalent of nearly 500 glasses of wine or 533 shots of whiskey. (Keep in mind that this “average” applies to all men, women, and children, many of whom don’t drink.) In one survey, two-thirds of men and more than one-half of women in the UK reported having drunk alcohol at least once during the past week.

The United Kingdom, like most western nations, is also battling an obesity epidemic. Nearly two-thirds of its adults — 67% of men and 57% of women — are either overweight or obese.

In an editorial in this week’s issue of The BMJ, Dr. Fiona Sim, chair of the Royal Society for Public Health, links alcohol drinking and obesity. She cites a recent survey showing that 80% of adults in the United Kingdom didn’t know the calorie content of their drinks. Most weren’t aware that alcohol contributed to the total calories they consumed. To remedy that situation, Sim calls for labeling all alcoholic beverages with their calorie content.

What about this side of the Atlantic?

Americans drink a little less than the British (an average of 8.5 liters per person per year), but we are somewhat heavier: 71% of U.S. men and 62% of women are either overweight or obese. Alcohol consumption plays a role in weight gain here, too. A report from the Centers for Disease Control and Prevention indicated that, on average, Americans get 100 calories a day from alcohol. (That average is based on non-drinkers as well as drinkers.) People who regularly drink alcoholic beverages get as much as 16% of their daily calories from alcohol, according to the CDC.

That’s too high, says Stacey Nelson, manager of clinical nutrition at Harvard-affiliated Massachusetts General Hospital. Alcohol falls into the category of “empty calories,” she explains, along with saturated fats and added sugars. The new proposed federal dietary guidelines limit empty calories to 20% of the daily total. “If you’re budgeting calories, your choice should be, ‘Do I want that drink or do I want dessert?'” she says.

How we process alcohol

In addition to directly adding calories, alcohol can affect calorie intake in other ways. Nelson cites evidence that having a drink with a meal can increase the amount of food consumed. Although researchers don’t know exactly why this is, they speculate that alcohol decreases inhibition or creates changes in brain chemistry that increase the reward you’re getting from food. Those same effects can prompt you to order another drink as well.

People might drink more sparingly if they knew how many calories they were consuming, Nelson thinks. Like Sim, she favors labeling alcohol containers with calorie counts in addition to alcohol content. “Why would we not label the calorie count in alcoholic beverages when we’re labeling every other beverage? I’m all for providing this information so people can make an educated decision.”

This kind of information will be available soon to some people who dine out. Beginning in December 2015, the Food and Drug Administration will require restaurant chains with 20 or more outlets to provide calorie information for food and some alcoholic drinks. The calorie counts may come as a wake-up call for drinkers who are accustomed to thinking of an average drink as containing 100 to 150 calories. That figure may be true for the standard 1.5-ounce shot of distilled spirits, 12-ounce bottle of beer, or 5-ounce glass of wine, but the “generous pour” at many bars and restaurants often doubles the amount. Moreover, concoctions containing syrups, liqueurs, juices, cream, and other ingredients can send the calories soaring. “A mudslide can have over 500 calories — more than in a Big Mac,” Nelson says. See the figure for some calorie counts in different alcoholic drinks.

It may be years before most alcohol containers or bar drinks come with calorie counts. However, if you want to keep your happy hour from becoming a hefty hour, there are already a couple things you can do:

Calories aside, limiting alcohol consumption to one drink a day if you’re a woman and two if you’re a man is always a good idea. When you exceed that limit, your health risks start to rise. 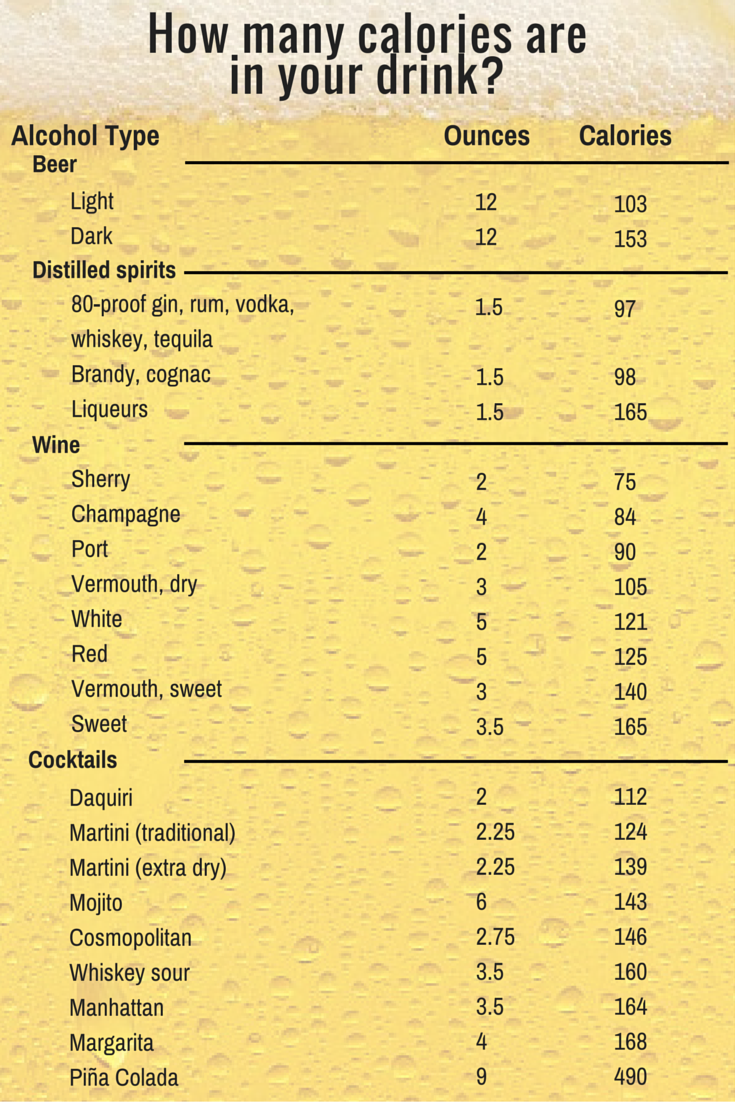