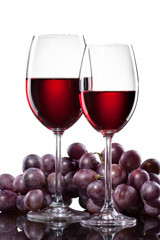 Oh, the giddy abandon that overtakes some headline writers when crowning a story about resveratrol, a chemical found in red wine. Here’s a sampling of the latest:

All that for an article published today in the journal Cell suggesting that resveratrol blocks the action of a muscle enzyme called phosphodiesterase 4 in mice. Don’t get me wrong: it’s interesting research, that could—emphasis on “could”—open the door someday to new treatments for heart disease, diabetes, memory loss, and other chronic conditions. But it doesn’t merit the hype that comes with almost any new research on resveratrol.

Resveratrol is a compound that various plants make to fight off bacteria, fungi, and other microbial attackers, or to withstand drought or lack of nutrients. It has been found in red and purple grapes, blueberries, cranberries, mulberries, lingonberries, peanuts, and pistachios. Resveratrol is also abundant in the roots of Japanese knotweed, a plant that has become a hard-to-eradicate invader in the United States.

Exactly how resveratrol might do all this is still a mystery. One possibility is that it turns on genes that make sirtuins, ancient proteins found in virtually all species. Activating sirtuins kicks off a response that fights disease and prolongs life. The Cell researchers were trying to figure out just how resveratrol might turn on sirtuin genes.

A long way to go

Virtually all of the positive studies on resveratrol have come from cultures of cells or laboratory experiments with yeast, roundworms, fruit flies, the short-lived turquoise killifish, or mice. The few human studies have looked at specific intermediate markers, such as levels of antioxidants, heart rate variability, blood flow to the brain, and amounts of cancer proteins. None have measured long-term health or survival.

Another big unknown is side effects. Resveratrol acts on many different tissues in the body. It is chemically related to estrogen. In some situations, high doses of resveratrol boost the activity of estrogen, in others they block estrogen. That makes resveratrol supplements iffy for women with cancer of the breast, ovary, uterus, or other estrogen-sensitive tissue, those trying to become pregnant, or those taking an oral contraceptive.

Resveratrol makes platelets in the bloodstream less “sticky,” and so could increase the risk of bleeding in people who take warfarin (Coumadin), clopidogrel (Plavix), aspirin, ibuprofen, or other nonsteroidal anti-inflammatory drugs.

Another cloud: a company called Sirtris Pharmaceuticals, which was established to develop drugs from resveratrol, pulled the plug on the program in 2010 when a clinical trial showed that one of these drugs might be linked to kidney damage.

If you believe that resveratrol will help you live longer and healthier, get it from food or wine, not by choking down resveratrol pills. Why? Eating red grapes, blueberries, and pistachios, or having a glass of your favorite red wine, are pleasurable ways to take in resveratrol. Plus you get all the other healthful plant products that come with the resveratrol. Getting it via supplement is dull, and you can’t always trust what you are getting. If you choose to take a supplement, shop carefully. A review by the independent ConsumerLab found that one brand cost just 15 cents per 100 milligrams of resveratrol, while another cost $2.76 per 100 milligrams.

It’s worth keeping an eye on resveratrol research. But it’s far too soon to be promoting it as a fountain of youth or wonder drug.