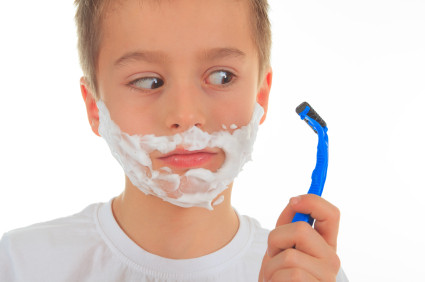 Two years ago, new research showed that American girls were hitting puberty at younger ages than ever. The same thing is happening with boys: they are starting puberty almost two years earlier than they did 30 to 40 years ago. Why this is happening isn’t clear, but it could affect social and sexual behaviors.

More than 200 clinicians assessed the sexual development of 4,134 boys between the ages of 6 years and 16 years living in 41 states. Half the boys were white, one-quarter were African-American, and one-quarter were Hispanic. The average age of puberty was 10 years for white boys, which is about one-and-a-half years earlier than what has long been considered “normal.” The average age was 9 years for African-American boys, about two years earlier than expected; and 10 years for Hispanic boys, which is unchanged from before. The results were published online in the journal Pediatrics.

Why might this be happening? This study couldn’t say, though the researchers offered a few possibilities: excess weight, changes in diet, less physical activity, or the presence of chemicals known as endocrine disruptors in food and the environment. It’s also possible that the way the study was done may have contributed to the shift.

What does it mean?

In girls, early puberty has been linked with increased risk for developing breast cancer and increased likelihood of engaging in risky sexual and other behaviors. Right now, we don’t know if earlier puberty will affect a boy’s long-term health and development. Further work is needed to determine that.

Puberty is a confusing time. It may be even more so for younger children, who may not be emotionally or developmentally ready for puberty.

The findings are one more reason to keep the lines of parent-child communication open. “Do not wait for your children to come to you with questions about their changing bodies,” advises Dr. Henry H. Bernstein, professor of pediatrics at Hofstra North Shore-LIJ School of Medicine and a medical advisor to Harvard Health Publishing. “That day may never come! Instead, sit them down and talk openly and honestly. Reassure them that the changes happening to them are normal.”

Although early puberty is increasingly common, it can be a signal of a tumor in the brain, pituitary glands, or elsewhere; an underactive thyroid gland; or other medical problems. If there’s a young boy in your household, keep an eye on his physical development. If you see that he is beginning to grow pubic hair earlier than you think is “normal,” talk to his pediatrician—and talk to him about the changes he is going through.