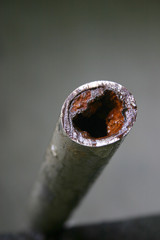 PAD can be a catchall term for problems in arteries that supply organs and tissues other than the heart. But it usually refers to blockages in the arteries that supply blood to the legs and other body parts below the heart. PAD is typically caused by atherosclerosis—the accumulation of cholesterol-filled plaque inside arteries—the same thing that causes most heart attacks and strokes. When plaque limits blood flow, it can cause a variety of problems. PAD can cause leg pain when walking or abdominal pain after eating. It can cause kidneys to fail. Severe PAD can lead to foot or leg amputation. And because of the atherosclerosis connection, many people with PAD die from a heart attack, sudden cardiac arrest, or stroke.

Despite all this, PAD often flies under the radar. “Unfortunately, many people—and that includes doctors—aren’t aware of peripheral artery disease, or they attribute its symptoms to something else, like arthritis or getting older,” says Dr. Reena L. Pande, director of the Vascular Diagnostic Lab at Brigham and Women’s Hospital and Instructor in Medicine at Harvard Medical School.

About one-third of people with PAD have no signs or symptoms of it, says Dr. Pande. Another third have vague symptoms such as low mobility or loss of strength that can be difficult to trace to PAD. The final third have clear symptoms, such as leg pain when walking, sores that don’t heal, coldness in a leg or foot, or, in men, problems getting or keeping an erection.

The new study, one of the largest and longest of its kind, followed the health of almost 45,000 male health professionals for 25 years. In this group, the factors that most strongly influenced the development of PAD were the same “big four” that are largely responsible for heart disease and stroke: smoking, diabetes, high blood pressure, and high cholesterol. A whopping 96% of those diagnosed with PAD had one or more of these problems.

Individually, each factor doubled the risk of developing PAD. Men with all four were 16 times more likely to have developed PAD. Those with none of the factors were six times less likely to have developed it. The longer a man had diabetes or high cholesterol, or the longer or more he smoked, the higher the risk of developing PAD.

“These data are in line with results of earlier studies, and underscore approaches we can take to prevent PAD,” says Dr. Pande.

One of the problems of tackling PAD is that it is often silent. The U.S. Preventive Services Task Force doesn’t yet recommend checking seemingly healthy people for it. But it’s a good idea to be checked if you have leg pain while walking that goes away when you rest. An evaluation for PAD may also make sense if you have heart disease, carotid artery disease, or kidney disease, or if a parent or sibling has peripheral artery disease.

As the saying goes, prevention is the best medicine. Quitting smoking and keeping blood pressure, cholesterol, and blood sugar under control can prevent PAD from getting established, or slow the disease process and possibly improve symptoms. Treating PAD begins with those four strategies and also includes

Don’t be fooled by the name—peripheral artery disease is a central problem that should command more attention than it gets.