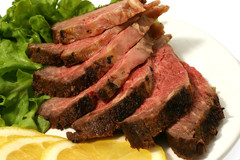 Is red meat bad for your heart? A new study suggests it is, but not for the reasons you might expect.

There’s long been a perception—not necessarily backed by strong evidence—that eating steak, hamburger, lamb, and other red meat ups the risk of heart disease. The saturated fat and cholesterol they deliver have been cited as key culprits. A team from a half dozen U.S. medical centers says the offending ingredient is L-carnitine, a compound that is abundant in red meat.

According to this work, published online in the journal Nature Medicine, eating red meat delivers L-carnitine to bacteria that live in the human gut. These bacteria digest L-carnitine and turn it into a compound called trimethylamine-N-oxide (TMAO). In studies in mice, TMAO has been shown to cause atherosclerosis, the disease process that leads to cholesterol-clogged arteries. We know that clogged coronary arteries can lead to heart attacks.

“The studies of red meat and heart disease in humans are conflicting,” says Dr. Dariush Mozaffarian, associate professor of medicine at Harvard-affiliated Brigham and Women’s Hospital. “This new research was well-done and compelling, but it’s too early to decide that this molecule, TMAO, causes atherosclerosis in humans or that this is responsible for some of the associations of meat intake and risk.”

Dr. Mozaffarian, a cardiologist and epidemiologist, studies the health effects of dietary habits and other lifestyle factors in large populations. His team has previously pooled the findings of the best studies available on red meat and health and found that people who eat unprocessed red meat regularly have, at worst, only a slightly higher risk of developing heart disease. Unprocessed red meat includes virtually all fresh cuts of beef, pork, lamb, and the like.

“If you look at people who eat unprocessed red meat, there is a relatively weak association with heart disease,” Dr. Mozaffarian says. “It’s not protective—and healthier dietary choices exist—but major harms are also not seen.”

In the bigger picture, we do have pretty damning evidence about the harms of eating a particular type of meat. “Processed red meats—bacon, sausage, salami, deli meats—are associated with much higher risk of heart disease,” Dr. Mozaffarian says.

Research at the Harvard School of Public Health has shown that people who eat the most processed meats have a higher overall risk of death. The ultimate reason for this is not yet clear, says Dr. Mozaffarian, but it may be the huge doses of sodium delivered by all those low-fat deli sandwiches and salami-festooned platters.

And here comes other spoilers against the L-carnitine study: Processed meats generally contain less L-carnitine than does fresh red meat. Heart-healthy fish and chicken also contain L-carnitine, Dr. Mozaffarian points out—although five to 10 times less of it than red meat. “TMAO needs to be studied more in humans to understand the implications for public health,” Dr. Mozaffarian says. “This new research is very interesting but is not yet the final word.”

To further complicate matters, a study published online today in the Mayo Clinic Proceedings suggests that supplements of L-carnitine may help heart attack survivors reduce the chances of dying prematurely or reduce symptoms of angina (chest pain with exertion or stress).

There’s still a long way to go before we know the full story about L-carnitine and heart disease. Even so, the Nature Medicine report is very important, Mozaffarian says. It suggests that regularly eating red meat boosts the number of L-carnitine-loving bacteria in your gut. “It’s the best demonstration so far of two-way communication between ourselves and the bacteria in out gut: what we eat affects the bacteria, and what they do with what we eat can influence health.”

“Based on the Nature Medicine study, I’d be concerned about taking L-carnitine supplements,” Dr. Mozaffarian says. “There was no strong reason to take such supplements before the study, and now this well-done study suggests there may be harm. I would definitely think three times before taking an L-carnitine supplement.” The studies in the Mayo report were mostly small with short follow-up, and included only heart attack survivors.

Of course, there are reasons to avoid eating red meat that aren’t directly related to individual health. Cattle farming has devastating environmental effects, including production of greenhouse gases, water pollution, and deforestation. “Health effects in humans aside, red meat consumption is clearly bad for the health of our planet,” says Mozaffarian.