Mediterranean-style diet linked to healthier arteries throughout the body 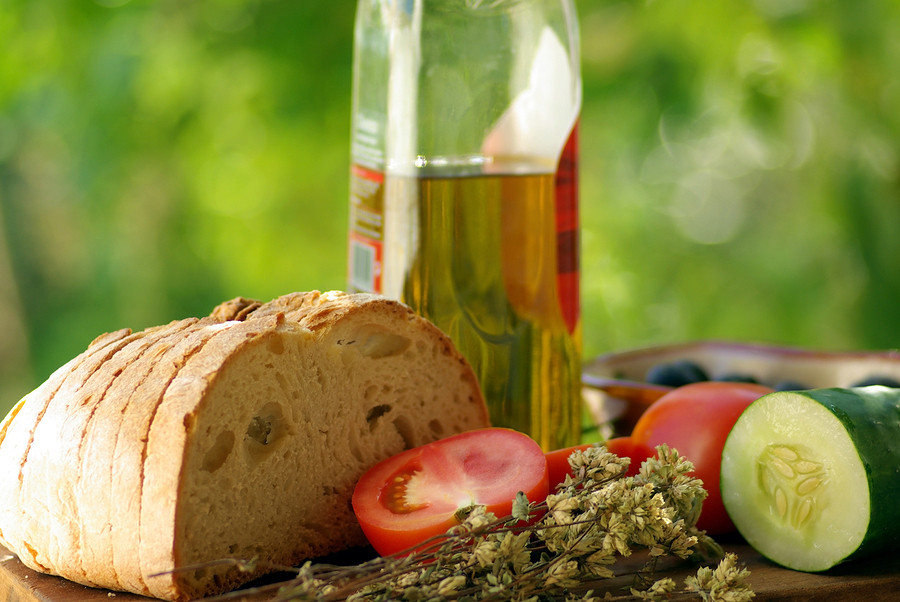 You’ve heard it a thousand times: The key to a healthy heart and brain is a healthy diet. For a growing number of people, a Mediterranean-style diet has been the stand-in for “healthy diet.” A landmark clinical trial done in Spain, known by the acronym PREDIMED, has been putting the Mediterranean eating plan on a more solid scientific foundation.

Last year, PREDIMED researchers reported that Mediterranean-style eating—rich in fruits, vegetables, and healthy plant oils—prevents heart attacks, strokes, and death from heart disease. This week in The Journal of the American Medical Association, they report that a healthy Mediterranean-style diet can also help prevent peripheral artery disease (PAD), a form of “hardening of the arteries.” PAD happens when fatty deposits obstruct the arteries that supply blood to parts of the body beyond the heart and brain, like the legs, arms, and abdomen.

“To our knowledge, this is the first randomized primary prevention trial to suggest an association between a dietary intervention and [reduced risk of] PAD,” the study authors wrote.

It’s an important finding. As many as 12 million Americans, most of them older, have PAD. It can cause leg pain when walking that goes away with rest (called intermittent claudication); a weakening of the aorta, the main pipeline that delivers blood to the body; pain after eating; erectile dysfunction; and other problems.

Though the findings were solid, keep in mind that they are preliminary. For one thing, PREDIMED was not designed to detect an effect of diet on the risk of developing PAD—although it’s not hard to imagine it being able to do so, given the diet’s effect on heart and artery health. To be scrupulously scientific, such incidental findings need to be confirmed with a study specifically targeted at PAD.

But taken as a whole, the PREDIMED trial has gone a long way to place healthy eating on par with medication as a way to prevent heart disease and stroke. Many previous studies observed that people who ate the Mediterranean way seemed to be healthier than others, but only a randomized clinical trial can pinpoint cause and effect.

“PREDIMED is a randomized trial and, as such, it provides higher quality evidence in comparison to evidence from observational studies on the health benefits of the Mediterranean diet,” says Dr. Dimitrios Trichopoulos, an epidemiologist with the Harvard School of Public Health who has conducted some of those studies.

In Spanish, PREDIMED stands for Prevención con Dieta Mediterránea, or “prevention with Mediterranean diet.” The Mediterranean diet is not a specific eating prescription, but rather a general style of eating that emphasizes certain healthy foods and minimizes other not-so-healthy ones. The basic mix is a variety of fruits, vegetables, nuts, and seeds, along with moderate consumption of fish, poultry, dairy, eggs, and olive oil, and minimal red and processed meat. Some cultures that favor Mediterranean-style diets may include a glass of red wine with their meals, but it isn’t required.

In PREDIMED, nearly 7,500 men and women were randomly assigned to adopt one of three diets: a reduced-fat diet or a Mediterranean diet supplemented with generous amounts of either nuts or extra virgin olive oil. Participants were 55 to 80 years old and at high risk of cardiovascular disease, but were still healthy at the time they entered the study.

How to go Mediterranean

It’s not hard to get started on a Mediterranean style of eating. Here are some general cooking and meal-planning tips from the Harvard Health Letter to help you make the transition:

I have heard alot about this diet; I would love more information about this. Great article.thanks

Great article. This is a scary condition and the number of people it affects is surprising.

We have seen patients with improvements when taking circulation related nutritional supplements. Some of the most encouraging improvements have been in reduced bruising and improve circulation.

I have heard alot about this diet; I would like more information about this. Great article.

The lifespan can be increased by reducing the heavy meals (full of calories and carbohydrates) intake. By doing so we would minimize the stress on our digestive system so that allocate energy and time for other tasks such as warding off the onset of disease, repairing and rebuilding the body’s cells.

Digestive enzymes are most bullied when we consume heavy meals excessively. The pancreas is forced to produce and secrete enzymes in larger quantities. Approximately 80% of body’s energy is mobilized only to break these foods down. This is why our bodies become easily exhausted and sleepy not long after we finish our meal. No other activities are so energy-drained as breaking down heavy meals!

By letting this happen over and over definitely will lower our energy, ruin our digestive system, stimulate the emergence of various diseases, and shorten our lifespan.

To avoid those all, stop eating heavy meals and start implementing an enzymes-rich diet that is found in vegetables, fruits, nuts, and seeds. For the best result eat them in their raw state as their enzyme and energy will not ruin by the heating process.

This blog is provides information about healthy diet. I would like to say that healthy diet is most important to body.oily food is not good to heart.

Olive Oil has n number of beneficial compounds that reduce inflamation in the arteries and buildup of fatty deposists.

Thank you so much for the awesome information about how to take better care of our bodies. I will look forward to applying the advice and also sharing it with my followers. I will be back to check out more great content. Thanks again!

I am a Nurse Practitioner with 25 years experience in helping people change their lives with diet… this works.

Thanks a bunch for sharing this with all of us you actually know what you are talking about!

I have been on a life style diet for emphysema from a book titled, How I Reversed My Moms Emphysema. Been on the diet for about four months. Can breath much better. The diet consists of organic sources if possible. Protein from fish, red meat, chicken ect. Vegetables Fifty percent raw fifty percent steamed. No breads no potatoes no starches. Only complex carbs from vegetables. Virgin olive oil ect. Seams a lot like the Mediterranean diet in many respects with added supplements to combat pathogens.

Congratulations on your publications; good information from a reliable source and written in language understandable by most. I wonder if using extra virgin olive oil is analogous to using cold-pressed wild caught salmon oil for the same reasons of simplicity in processing and retention of “healthy substances in the oil”, i.e the oil more closely resembles the native product; is it the same in principle as eating fresh vegetables and fruits for antioxidants rather than taking pills? Some recent publications suggest that fish oil (type and processing method not specified)doesn’t appear to offer cardioprotection. Does it depend on the fish oil used – cold pressed or extracted by other means?

I am about to be 90 and have been eating a Med type diet the last 15 years. I am in good
shape ( from Tai Chi) and have only a few problems which the doctors say are not life threatening. Thanks be to G0d.

The Mediterranean Diet includes plenty of fresh vegetables and fruits which many people rarely eat today in their natural state preferring to drink juice or processed vegetables. It also includes plenty of fish and smaller portions of animal protein or substituting with vegetable proteins like beans. Everything is prepared from scratch eliminating additives, preservatives, sugars, and excess salt all of which have negative effects on a healthy diet.

I believe that going back to preparing basic fresh foods is the way to a healthy diet.