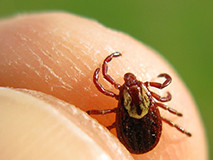 The 30,000 cases of Lyme disease reported to the Centers for Disease Control and Prevention (CDC) each year are just the tip of the iceberg. According to a new CDC estimate, more than 300,000 Americans are diagnosed with the tick-borne disease each year. The new number was presented at the 2013 International Conference on Lyme Borreliosis and Other Tick-Borne Diseases, being held in Boston.

Although the new numbers may be an overestimate, they still provide a clearer picture of the impact of Lyme disease in the United States, says Dr. Robert H. Shmerling, a rheumatologist at Beth Israel Deaconess Medical Center and associate professor of medicine at Harvard Medical School.

Instead of relying mainly on cases reported by doctors, a standard public health approach, CDC researchers are trying to get a more complete picture of Lyme infections by sifting through health insurance claims, analyzing data from clinical laboratories (which do the tests necessary to diagnose Lyme disease), and surveying the public for self-reported Lyme disease.

“We know that routine surveillance only gives us part of the picture, and that the true number of illnesses is much greater,” said Paul Mead, M.D., chief of epidemiology and surveillance for CDC’s Lyme disease program, in a statement. “This new preliminary estimate confirms that Lyme disease is a tremendous public health problem in the United States, and clearly highlights the urgent need for prevention.”

Although Lyme disease has been diagnosed in almost every state, most cases reported to the CDC are in the Northeast and upper Midwest—96% of cases come from 13 states.

The aftermath of a tick bite

Lyme disease is a zoonotic disease, meaning a disease spread between animals and humans. It is caused by a bacterium called Borrelia burgdorferi, which lives in mice and deer. These corkscrew-shaped bacteria, called spirochetes, get into black-legged ticks when they feed on an infected animal. They migrate to the tick’s salivary glands, and, if the tick bites a person, are injected into the bloodstream. An excellent illustration by The Boston Globe depicts this life cycle.

In some people, the immune system destroys the bacteria before they can do any damage. In others, they grow and multiply, causing an infection. Symptoms include a bull’s-eye-shaped rash, fever, headache, and fatigue. Treatment with antibiotics can usually prevent any short- or long-term repercussions, says Dr. Shmerling.

If the infection isn’t treated, problems can develop in other parts of the body, including the joints, heart, and nerves. It can also cause arthritis that persists months or years after the tick bite.

Some people with Lyme disease and some doctors have argued that Borrelia burgdorferi can somehow evade courses of antibiotics and become a chronic infection that needs long-term antibiotic treatment—even though conventional antibody tests are negative. Chronic Lyme disease has been blamed for causing pain, fatigue, muscle aches, loss of memory and thinking skills, and a host of other problems.

A Boston Globe series, “Bitten By Uncertainty,” has been exploring this controversial side of Lyme disease.

Like most communicable diseases, Lyme disease is largely preventable, says Dr. Shmerling. Avoid being bitten by a blacklegged tick (also known as a deer tick) and you won’t get Lyme disease. There are two main ways to do that—stay out of brush and high grass in and around wooded areas, or get out in nature and protect yourself. Here are six tips for protecting yourself from ticks, adapted from the Connecticut Agricultural Experiment Station’s comprehensive handbook about tick management.

2. Tuck your pants inside your socks. It may not be a flattering look, but it creates a physical barrier against ticks.

3. Use insect repellent. Most of the chemicals that repel mosquitoes are somewhat effective against ticks, although it may take a heavier concentration of DEET—between 30% and 40%—to really keep them away. Permethrin is a stronger chemical that kills ticks as well as repels them. Products containing permethrin should be sprayed on clothes, not on the skin. Picaridin repels mosquitoes and other insects but not ticks.

4. Stay in the middle of the path (or fairway). Ticks can’t fly or jump, so they can only get on you if you come into contact with the kind of environment they live in: moist, often shady, wooded areas, with leaves, low-lying plants, and shrubs.

5. Think sunny. Ticks don’t do well in dry, open areas. Lawn furniture and playground equipment should be set back from the edge of wooded, shady areas. If you’re picnicking, pick a patch of well-tended lawn or some open ground.

6. Inspect yourself and your children (and your pets), especially the legs and groin. Ticks usually get picked up on the lower legs and then climb upward in search of a meal. The odds of contracting Lyme or other tick-borne disease are minimized if a tick is removed soon after it’s attached, and there’s no risk if it’s still crawling around. The shower is a good place to conduct a tick check. Feel for any new bumps on soaped-up skin.

And if you do get bitten by a tick, remove it using the method recommended by the CDC: Use a pair of fine-tipped tweezers to grasp the tick as close to the skin as possible. Then pull it out with a steady motion. Once the tick has been removed, clean the skin with soap and water. Dispose of the tick, which is probably still alive, by placing it in alcohol or flushing it down the toilet. Don’t fall for “home remedies” like covering the tick with Vaseline or touching it with a just-blown-out match.

I blog frequently and I really appreciate your information. Your article has truly peaked my interest. I will take a note of your website and keep checking for new details about once a week. I opted in for your Feed as well.

I will never forget when I was a kid, my Dad pulled a tick from the base of my neck, and then set fire to it.
It scorched a place of my Mom’s hard wood floor. She never did find out where it came from.

I got the tick from fishing with my Dad on the previous day, so I was ordered to silence. The tick was engorged and I had no idea it was there.

While my daughter’s father-in-law is being treated for Lyme disease in CT, one of my dogs has been exposed to Lyme disease in Poway (San Diego County) this summer. I have never heard of it here in our area, but apparently it is here to stay. This occurred in my own backyard. A routine test for heartworm from my vet showed this exposure. People on the west coast think they and their animals are immune, but that is not the case. Get tested, and have your animals tested if you find ticks or the “red ring” on your body. I hear it is extremely painful.

Which insect repellent, will you advise.

It’s sad to see such bad maths. The CDC writes that 300 000 is “10 times higher than” 30 000. But the expression means 11 times. CDC being rather an important body should know better but while it may be excusable for them, I really expect more from a world reknowned institution like Harvard. “Lyme disease 10 times more common than thought” should be “Lyme disease 10 times as common as thought”. I would also add the word “previously” before “thought”.

Seriously? Isn’t life too short for this kind of stuff?

FWIW, I am not sure you are winning any awards with this sentence from above:

What is "walking pneumonia"?