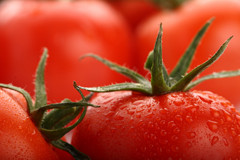 They are heaven on a burger and superstars in a sauce. But succulent tomatoes are far more than just a delicious fruit. Eating tomatoes may also help lower your risk of stroke, likely due to the lycopene they contain.

Lycopene is a carotenoid—a family of pigments that give fruits and vegetables their brilliant red, orange, and yellow coloring. Lycopene is also a powerful antioxidant that eliminates dangerous free radicals that can damage DNA and other fragile cell structures.

“The shape of the lycopene molecule makes it very effective in being able to quench free radicals,” says Dr. Edward Giovannucci, a professor of nutrition and epidemiology at the Harvard School of Public Health. “We don’t really understand it entirely yet, but lycopene may have specific properties that protect the cell in a way other antioxidants may not.”

Past research, some of it done by Dr. Giovannucci, has shown that a diet rich in lycopene-containing foods may help lower the risk of prostate and other cancers. Now, in a report just published in the journal Neurology, a team of Finnish researchers has linked lycopene levels in the blood to stroke protection. They made this connection after following more than a thousand middle-aged men for 12 years. Men with the greatest amounts of lycopene in their blood had a 55% lower chance of having any kind of stroke. The lycopene connection was even stronger (59%) when it came to protecting against strokes due to blood clots (the most common kind).

The finding came as a surprise—the researchers initially wanted to know if other antioxidants affected strokes, such as alpha carotene, beta carotene, vitamin A, and vitamin E. But they didn’t.

The researchers suggested that lycopene, in addition to its ability to attack free radicals, may also reduce inflammation and cholesterol, improve immune function, and prevent blood from clotting. All of these may help reduce ischemic strokes, which are caused by clot-caused blockages in blood flow to the brain.

Most of that is plausible, says Dr. Giovannucci. But we still need larger studies to confirm the findings and to figure out if the stroke protection is due to lycopene or healthy lifestyle habits. “Remember, a high lycopene consumer is likely to eat more vegetables and not be a smoker,” says Dr. Giovannucci. Still, he says the benefits of lycopene for both cancer and stroke protection are very promising.

Personally, this makes me want to increase my tomato intake. Slice of tomato on my turkey sandwich? So yesterday. Hello, glass of tomato juice at every meal.

But hold that order. Overdoing it on lycopene isn’t necessary, says Dr. Giovannucci.

He recommends at least 10,000 micrograms of lycopene per day—from food. That sounds staggering, but it’s actually easier to get than you might think, especially since lycopene is found in other foods than tomatoes. Tomato-based products do, of course, give you the most bang for your buck.

Keep in mind that lycopene is better absorbed in the body when it’s combined with some fat, points out Dr. Giovannucci. “That’s because lycopene is fat soluble,” he explains, “and oil in tomato sauce, for example, makes it ideal for absorbing lycopene.”

But don’t go eating fatty foods with tomatoes because you want the lycopene absorption. Dr. Giovannucci says it’s better to eat a variety of healthy foods and shoot for the daily intake recommendation.

He also cautions that you don’t try to beat the system by popping a lycopene supplement. “Supplements may give you a purified form of lycopene, but you’re not sure you’re getting what you get from food. You may be getting the wrong form of lycopene in a supplement. There are also a lot of compounds in food that aren’t lycopene but that are similar, and some of those molecules may be part of what makes lycopene so beneficial,” says Dr. Giovannucci.

So stick to a diet that includes some lycopene-rich foods. It’s cost effective, it’s easy, and it’s not dangerous if you overdo it. There’s no evidence of lycopene toxicity from diet. Best of all, lycopene is likely in many of your favorite foods. And that makes the succulent tomato far more than a food; that makes it almost a nutraceutical.