Is it Alzheimer’s, or just a memory slip? 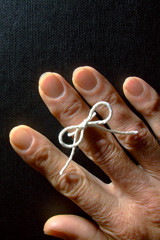 A few months ago, I hung up the phone after a conversation with my 85-year-old father wondering, “Should I be worried about Alzheimer’s?” That’s because I noticed my dad struggling to express himself, faltering over the right words, and forgetting names. We live 1,500 miles apart, so I don’t get to see how he is doing day-to-day.

Everyone has moments of forgetfulness—misplaced keys, a forgotten errand, the name of that movie you want to recommend but can’t get off the tip of your tongue. A certain amount of forgetfulness seems to be a normal byproduct of aging. Researchers speculate that it may be linked to changes in the brain that begin around age 50, such as a decline in certain brain chemicals called neurotransmitters or a gradual loss of receptors on brain cells.

How do you know whether to attribute some episodes of forgetfulness to normal age-related changes or something more serious? As the Harvard Medical School Special Health Report A Guide to Alzheimer’s Disease reveals, by noting some of the characteristics of these forgetful moments, you may be able to get a clearer sense of normal versus worrisome forgetfulness. Here are a few questions to ask yourself:

Is my loved one worried about the memory loss? When Alzheimer’s or other dementia occurs, the person affected is often much less concerned about memory loss than his or her family members. The reverse is true for normal age-related memory problems.

Is he or she getting lost in familiar territory? If your loved one doesn’t get lost in familiar surroundings, but does sometimes pause momentarily to remember the way, normal aging is likely. But getting lost in his or her own neighborhood while walking or driving, and taking hours to return, should raise a concern about Alzheimer’s or other dementia.

Are word-finding problems common? Occasional trouble finding the right word probably isn’t worth worrying over, but frequent word-finding pauses and substitutions —for example, calling the telephone “the ringer” or “that thing I use to call you”—is typical of Alzheimer’s or other dementia.

Is your loved one losing the ability to socialize, or interest in it? While it isn’t uncommon for an older adult to be unwilling to operate new devices or to fumble a bit with a cell phone or computer, it’s a warning sign if the person has trouble operating common appliances like the dishwasher properly or is unable to learn to operate even simple new devices. Also, it’s worth noting if he or she has lost interest in social activities or if his or her social skills seem to be declining.

The task of figuring out “is it Alzheimer’s?” is easier for me, since my father and 92-year-old stepmother have other family living nearby, and I often check in with them. If that wasn’t an option, I would talk to my dad’s doctor. That’s probably worth considering if you have unresolved questions or worries about a loved one’s memory.

A Guide to Alzheimer’s Disease is available from Harvard Health Publishing.