The “heartbreak of psoriasis” may affect your joints, heart, and mind 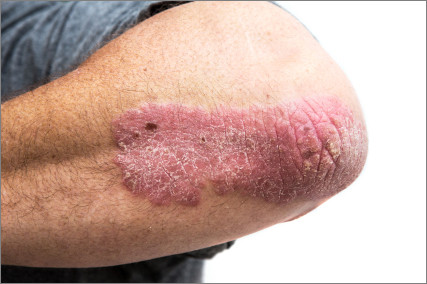 Raised, red patches covered with silvery scales on the elbows and knees are the classic sign of plaque psoriasis. It’s the most common form of this skin disease, named after an ancient Greek word meaning an itchy or scaly condition. But psoriasis can sometimes take different, more serious forms, and has been linked to other physical and mental health problems.

According to a report in the July issue of the American Journal of Preventive Medicine, psoriasis is a large public health problem, affecting nearly 7 million adults in the United States. The report, based on a survey of 10,676 adults, found that non-Hispanic whites are much more likely to have psoriasis than other racial or ethnic groups. People who were older, obese, and former smokers were also more likely to have had a psoriasis diagnosis.

Most people—82%—said they had little or only a mild form of psoriasis, meaning that 2% or less of their body surface was affected. (The area covered by the palm of your hand is equal to about 1% of your body surface.) About 18% reported moderate to severe disease, defined as covering 3% or more of your body surface. But in some severe cases, as much as half of a person’s body surface can be involved. And nearly a third of people with psoriasis develop psoriatic arthritis, which causes stiff, painful joints and other debilitating symptoms.

People with psoriasis also had significantly more “mental distress” and were about 1.5 times more likely to report mild to severe depression than those without the disease. But these mood problems may go deeper than simply being unhappy about having an unsightly skin disease, says Dr. Suzanne Olbricht, as associate professor of dermatology at Harvard Medical School.

“Twenty years ago, we thought of psoriasis as a skin disease that sometimes affected the joints. But in the last five years or so, it’s become very apparent that psoriasis is an inflammatory condition,” says Dr. Olbricht. People with psoriasis are more likely to have other conditions linked to inflammation, including heart disease, diabetes, obesity, and inflammatory bowel diseases such as Crohn’s disease and ulcerative colitis. “If you have a disease that creates enough inflammation that it’s affecting your heart, it’s also very hard for your brain to function well,” says Dr. Olbricht. The depression that people with psoriasis often experience is not just a consequence of disliking how they look, she believes.

Several studies suggest that weight loss and vigorous exercise, both of which help combat inflammation, may help thwart psoriasis. Last year, a study in JAMA Dermatology found that obese women with psoriasis who lost weight on a low-calorie diet reported less skin irritation and better quality of life. And data from the Nurses’ Health Study found that women who exercised vigorously were much less likely to develop psoriasis than those who exercised at moderate or lower levels. (Vigorous exercise was equal to 105 minutes of running or 180 minutes of swimming or playing tennis per week.) The study, published in Archives of Dermatology in 2012, was led by Harvard Medical School associate professor of dermatology Dr. Abrar Qureshi.

Even if you can’t manage that level of intensity, any amount of exercise is beneficial.  As I wrote in Skin Care and Repair, one of our Special Health Reports, exercise plus other lifestyle choices, such as avoiding tobacco, taking steps to ease stress, and eating a healthy diet, can help keep your skin healthy—and  improve overall health and well-being.

hi very morning above is very nice article thankyou for it.hope i will be follow in my daily routine practice.so very
very thanks.

Thank you for this blog and all the REAL information. There is so much crap out here and I am grateful or having access to Matt’s info. I am a newbie and with this info I am slowly but sure getting there. The content and the comments are educational as URL canonicalization was a new term to me and I am making some corrections to my sites.

People with psoriasis also had significantly more “mental distress” and what about 1.5 times more likely to report mild to severe depression than those without the disease.