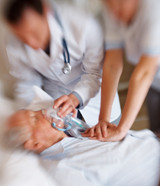 A heart attack is a life-changing event. For some people, surviving a heart attack brings renewed appreciation for life. For others, the event is so traumatic that worrying about having a second heart attack consumes their lives.

By the latest account, 1 in 8 heart-attack survivors experiences a reaction that might be called post-traumatic stress disorder (PTSD). Although PTSD is usually associated with extreme trauma such as war, rape, or a natural disaster, heart-attack survivors can experience the same key symptoms: flashbacks that occur as nightmares or intrusive thoughts. As a result, the survivor actively tries to avoid being reminded of the event and becomes hypervigilant worrying that it will happen again.

It’s a high price to pay for having your life spared.

“Everyone knows that a heart attack is a serious medical condition. What might not be as obvious is the psychological trauma that can result from having a major heart attack—especially the fear that it might occur again and cannot be predicted. In a small proportion of patients, this fear itself can be disabling,” says Dr. Deepak Bhatt, chief of cardiology at the VA Boston Medical Center and a professor at Harvard Medical School.

The 1 in 8 number comes from researchers in New York and Boston, who searched all observational studies relating PTSD to heart attack published since 1948. In the 24 that met their inclusion criteria, the mean age of those who experienced this extreme reaction varied from 53 to 67. The researchers found that the diagnosis of PTSD was significantly more common in younger heart-attack victims, without regard to gender. In the three studies that reported clinical outcomes, heart-attack survivors with PTSD had double the risk of dying or experiencing a second heart attack as those without PTSD. The work was published online in PLoS One.

And although heart attack severity was not recorded in most of the studies that were analyzed, Dr. Bhatt suspects that PTSD might be more likely to occur when a person dies from the event and is resuscitated.

As treatments for heart attack continue to improve, 1.4 million people a year are now surviving the event long enough to be discharged home. If the study is correct, 168,000 of them will be diagnosed with PTSD every year. It’s a grim reminder that as we get better at fixing the body, we must recognize the need to treat the mind.

“The connections between the heart and mind are powerful, and we are only starting to understand these linkages,” says Dr. Bhatt.

The symptoms of PTSD can arise suddenly, or come on gradually. There are three main types of symptom:

If you recognize one or more of these symptoms in yourself or someone else after a heart attack or other traumatic event, don’t write it off as something that will pass. Identifying PTSD early is an important step to coping with it. The sooner treatment is started, the more likely it will be successful.

Treatment generally includes a type of “talk” therapy known as cognitive-behavioral therapy. It may also include an antidepressant such as Prozac or Zoloft. An experimental treatment known as eye movement desensitization and reprocessing (EMDR) may also help.

Nice post of Recognizing and treating PTSD. Thanks for the good information.

Thank you for this needful and valuable discussion on Heart Attack.

My ex was suffering of ptsd after she got abused by her step father. It cause secondary problem during our relationship. She consulted but no real results.

I survived a heart attack in February 2011. It was sudden cardiac arrest. The experience in the hospital was the worst. No one told me what had happened, why I was there when I woke up 4 days later, isolated in ICU. It happened at work and going there everyday makes it hard. It seems as if they expect me to be leaping with joy 24/7 and the reality for me is that I’m scared.

I’ll be sure to tell my friends to their friends if we have known someone with PTSD. It’s a very important info, especially those with heart attack

Wonderful post, I will certainly be more wary in my own lifestyle to avoid this particular disorder. A very sad disorder indeed, my heart goes out to its victims.

In an interesting twist on the issue, I have treated a patient who had severe PTSD and a defibrialtor implant. In her case the heart problems exacerbated the anxiety. Of course treating the anxiety effectively goes a lon way towards treating both.

health it is necessary in case of how our diet, exercise, do not eat, especially foods that are too often carelessly consume food preservatives menngandung sangant it is not good for our health.

thanks for this wonderful post.. this is nice insight about heart attack,.,helped me a lot!

Good information.
By reading this article, I was more fond of my heart. and live a healthier life.

So, what does Re-experiencing the traumatic event means? I learn more to prevent my health of getting heart attack. Could you give your suggestion, having a good life to prevent this.

I dated a girl that had PTSD from a robbery that occurred when she was a child. She was still having nightmares and many of the symptoms above in her early thirties. I went to some of her talk therapy and learned about how they treat PTSD. It is sad disorder.