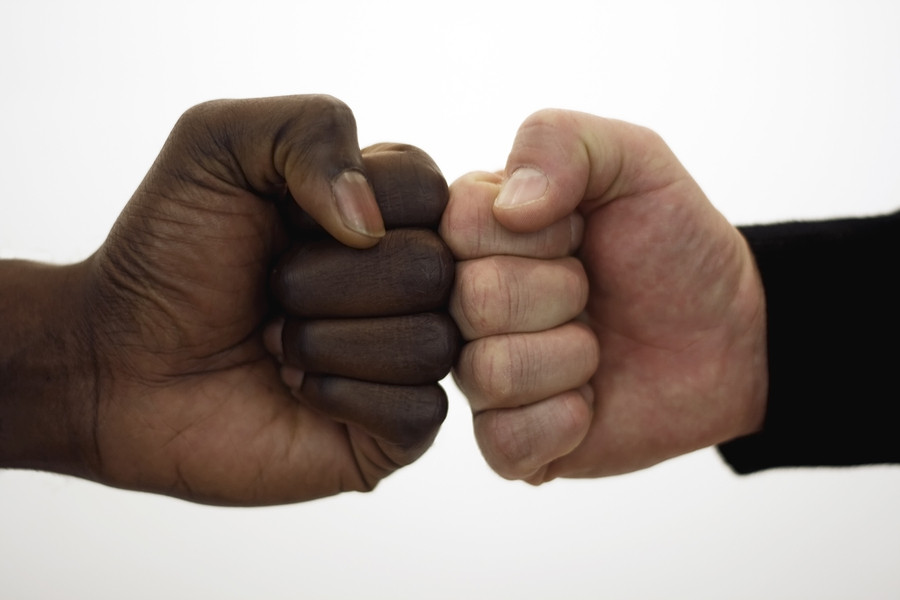 The handshake is an important way that many people communicate nonverbally. It’s a standard gesture when we say hello, goodbye, and make an agreement. We’ve been doing it for millennia.

But hands carry germs that can spread infections to others. And some of these infections can be very serious, including those that can’t be killed by standard antibiotics. Is it time to consider changing the tradition of shaking hands?

Two researchers from Aberystwyth University in Wales make the case that handshaking exchanges a lot more germs than a modern alternative, the fist bump.

Their experiment was simple. Both researchers put sterile gloves on their right hands. One dipped the gloved hand into a contained filled with a solution teeming with harmless E. coli bacteria. Then they shook hands and measured the number of bacteria on the glove that had not been dipped in the E. coli solution. They did the same thing for high fives and fist bumps. (You can see an example of the experiment in this video.)

Fist bumps went viral in 2008 when then-candidate Barack Obama and his wife, Michelle, gave each other a fist bump after a campaign speech in Minnesota. (Writer Simon Usborne offers an interesting perspective on fist bumping in The Independent.) Last month, authors of an article in The Journal of the American Medical Association raised eyebrows by suggesting that handshaking be banned in hospitals. Despite the daily efforts of hospital infection control teams, hospital workers only get hand cleansing right 40% of the time.

That’s one way health care providers spread harmful germs to their patients. An estimated one in 25 people who are hospitalized develop health-care associated infections. These infections kill 75,000 people each year, according to estimates from the U.S. Centers for Disease Control and Prevention.

It was a bold opinion piece. The handshake is a traditional way doctors and all patient care providers convey warmth and empathy to patients, family members and fellow healthcare workers. Would a fist bump do the same? Hard to tell. Some people would easily make the change; for others it just wouldn’t be a good substitute for the handshake.

No matter how you greet someone, washing your hands often will do more to keep you from spreading germs than giving someone a first bump. It’s especially important if you are in the hospital, or visiting someone in the hospital. (No matter where you are, if you don’t know where someone else’s hands have been, the fist bump may not be a bad option.)