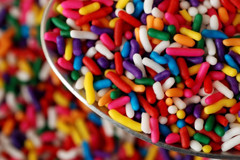 Parents, advocacy groups, and some scientists have long worried about a possible link between artificial food colorings and hyperactivity in children. On Thursday, an FDA panel concluded that there isn’t enough evidence to prove that artificial food colorings contribute to hyperactivity, distractibility, and other behavior problems in most children. However, the panel wrote that certain children with attention deficit hyperactivity disorder (ADHD) may be uniquely vulnerable, not just to food colorings, but to any number of food additives. Furthermore, the panel noted that the available evidence suggests that the children who are vulnerable to food additives have a unique intolerance to such substances, not that the substances themselves are inherently toxic to the nervous system.

On that theme, as we reported in the Harvard Mental Health Letter, only a small minority of children are vulnerable to the effects of artificial additives and it’s difficult—and in practical terms, almost impossible—to determine who they are. There is no specific validated test for this kind of vulnerability.

Before offering some practical suggestions for parents (below), let’s take a look at some background:

The FDA convened the Food Advisory Committee to review the scientific evidence on artificial dyes and hyperactivity after receiving a 2008 petition submitted by the Center for Science and the Public Interest (CSPI). The CSPI asked the FDA to ban food dyes used in commercially prepared food—especially in junk food. Among other things, these dyes turn Twinkies yellow, give corn chips their orange hue, and provide the eye-popping colors in Jello, lollipops, and cereals marketed to children.

For more than 30 years, researchers have been examining whether synthetic dyes and other chemicals might contribute to behavioral changes in children. Teasing out whether food coloring causes ADHD or if the two are merely associated is a tall order. By no means do the experts have it sorted out yet. The FDA committee’s vote today is in line with the consensus view among scientists, that diet alone is probably not the driving force behind ADHD symptoms such as inattention, hyperactivity, or impulsive behavior. At the same time, the FDA’s ruling—and several recent studies—suggest that food additives could contribute to symptoms in some children.

In 2007, for example, a well-designed study in Britain found that preschoolers and elementary school students became slightly more hyperactive when they consumed drinks containing artificial colors. Using a complex calculation of “effect size,” the investigators estimated that the additives might explain about 10% of the behavioral difference between a child with ADHD and one without the disorder.

This was similar to the effect size reported in an earlier review by researchers at Columbia University and Harvard University, who estimated that removing artificial food colorings from the diets of children with ADHD would be about one-third to one-half as effective as treatment with methylphenidate (Ritalin).

So what do you do if you’re worried about how artificial colorings in food might affect your child, or yourself? Here’s some advice I wrote on the topic of diet and ADHD.

Avoid a radical approach. For most children with ADHD, there is no evidence that radical diets that eliminate nearly all processed foods and many fruits and vegetables—such as the Feingold diet—do any good. And there is no easy way to identify the few children who might benefit from diets that ban particular foods.

Try eliminating some foods. If you are concerned about behavior changes in your child, or yourself, experiment a bit. Try removing the major dietary sources of artificial colors and additives and see if symptoms improve. The major sources are candy, junk food, brightly-colored cereals, fruit drinks, and soda.

Start moving. Physical activity is great for the brain as well as the body. Children (and adults) benefit when they have time to participate in sports, take dance classes, or just play—outdoors or inside.

You’ll notice that these recommendations are healthy recommendations for anyone. Minimizing candy and sugared drinks, eating a truly balanced diet, adding physical activity to the menu—these habits will have any number of health benefits (both for the body and the brain). I don’t make these suggestions lightly. I know how difficult it is to get your child (especially a child with behavioral difficulties) to eat his or her vegetables. But I also believe it is wise not to let concern over food additives distract parents from established guidelines for healthy eating.

I figured out more a new challenge on this weight reduction issue. Just one issue is a good nutrition is especially vital while dieting. An enormous reduction in bad foods, sugary food, fried foods, sweet foods, red meat, and bright flour products can be necessary. Retaining wastes parasitic organisms, and wastes may prevent desired goals for shedding fat. While specific drugs quickly solve the situation, the awful side effects usually are not worth it, and in addition they never present more than a short-term solution. It is a known undeniable fact that 95% of diet plans fail. Thank you for sharing your notions on this site.

I think that those suffering from this problem should, instead of going towards a radical diet, do something more moderate and health oriented. [URL removed by moderator] Follow a diet that includes healthy fruits, vegetables, lean meats, whole grains, lots of fiber,nuts, etc. This will help stabilize blood sugar levels also. Eating all the junk food that is readily available only causes health problems so even if it doesn’t help much with ADHD, it will help with other issues in the long run.

I love this article……
Very nice and powerfull

The FDA convened the Food Advisory Committee to review the scientific evidence on artificial dyes and hyperactivity and I strongly believe that physical inactivity in children is one of the major factors for developing serious conditions such as high blood pressure, low HDL cholesterol, diabetes, and obesity.

I strongly believe that physical inactivity in children is one of the major factors for developing serious conditions such as high blood pressure, low HDL cholesterol, diabetes, and obesity. The American Heart Association recommends that children should participate in at least 60 minutes of moderate to vigorous physical activity every day. I somewhat disagree with that. While one hour of physical activity is good, it’s simply not enough. I remember in my early days as a kid, I spent more than half of my day outside the house going to school and playing with other kids after school. My parent had difficult time getting me back at home in the evening. We did not have computers, iPods or MP3 players, so we had to spend more time with other kids engaging into all sorts of physical activity. I am not surprised scientist did not find a link between artificial colorings in food and children’s health. We had that too. But we were way more active as kids and had less sugar and junk food in our diet.