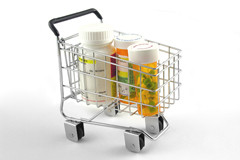 That drug you picked up at the grocery store—you know, the one that keeps acid reflux at bay or helps you lose weight by blocking fat absorption. It used to be available by prescription but is now available over the counter (OTC). You know how it can help you, because you’ve seen the ads. But do you know how safe it is for you to take?

Chances are you don’t. While it’s natural to assume that all OTC drugs are safe for just about everyone, that’s a mistake.

“Every person has a unique set of circumstances, a unique set of disease states, is taking different drugs, and reacts to medications in a unique way. You can’t say that just because a drug that is safe for someone else, it will be safe for you,” says William Churchill, chief of pharmacy services at Harvard-affiliated Brigham and Women’s Hospital.

And because of a quirk in regulations about drug ads, no one is legally obliged to tell you what the risks of taking a particular OTC drug might be.

A recent report in JAMA by Harvard-affiliated physicians found that when a prescription drug moves to OTC status, balanced advertising tends to fly out the window. Of the four drugs randomly selected for the study—omeprazole (Prilosec, Nexium), orlistat (Alli), loratadine (Claritin), and cetirizine (Zyrtec), only Alli mentioned any potential harmful effects at all.

This “sin of omission” that can mislead people into thinking the drug is harmless is a direct result of jurisdiction. The Food and Drug Administration (FDA), which oversees the advertising of prescription drugs, insists that every side effect and interaction found in clinical trials of the medication be included in every ad. But OTC advertising is overseen by the Federal Trade Commission (FTC). It requires only that ads meet a “reasonable consumer” standard of truthfulness. As a result, ads for OTC medications tend to take a “how we can help you,” approach, and intentionally omit important “how we might harm you” information.

This greatly concerns Churchill, who has been a pharmacist for 38 years. “A lot of drugs that move to OTC status have the potential to cause harm if users are not aware of the side effects. Personally, I don’t like to see prescription drugs go OTC. Patients don’t understand how they work or what’s at risk if they take them long term,” he says.

The Harvard study did not intend to pick on certain drugs. They simply identified four drugs that were marketed to consumers with lively ad campaigns both before and after their shift to OTC status. But at least two of the four drugs have potential risks.

Omeprazole (Prilosec) increases the risk of bone weakening and low magnesium levels when used a long period of time. A magnesium deficit can produce such varied symptoms as muscle cramps, tremors, hyperactivity and low calcium or parathyroid hormone levels, and it can interfere with absorption of vitamin B12 and vitamin D. The FDA was concerned enough about this to issue a safety warning suggesting that a doctor test a patient’s blood magnesium level before writing a prescription for a proton pump inhibitor. Who will do this now that the drug is available without a prescription?

Orlistat presents a different issue. Alli is available OTC, but Xenical—the same drug at twice the strength—requires a prescription. What’s to prevent a patient from taking two Alli tablets at a time—or three or four—to get super fat-blocking power? Absolutely nothing, although the gastrointestinal side effects of this drug may be a major deterrent.

Perhaps the most popular drugs moved from prescription to nonprescription status are the nonsteroidal anti-inflammatory drugs (NSAIDs). If not taken appropriately, these drugs have the potential to cause gastrointestinal bleeding, and there is new concern they may cause cardiac events.  Yet some people with aches and pains of all kinds pop them like candy.

“People often think that if 200 mg is good, then 400 mg will be better. If this doesn’t stop the pain, then it’s okay to take 600 to 800 mg. They don’t realize that as dose increases, how often you can take the drug should decrease,” says Churchill.

Does this mean drugs should not be sold OTC? Of course not. But you can avoid potential pitfalls by asking a pharmacist whether the drug is okay for you to take.

“Every pharmacist is trained to serve as a resource about drug therapy, so don’t be afraid to ask,” says Churchill.

Meanwhile, the push to make drugs more widely available continues, albeit with mixed success. Churchill was relieved when statins were turned down. “Statins have multiple drug interactions and can cause muscle issues such as rhabdomyolysis, which can cause kidney failure or death,” he says. “Besides, on what basis does a patient understand when and how to treat their cholesterol?”

As Churchill notes, drugs can be lifesaving, but also life-taking. Let the consumer beware.

Great job on presenting factors related to over the counter drugs that are often overlooked.

I think that any person curious about this sort of stuff shouldn´t be afraid to try it out. I mean, just like the article says, ask the pharmacists for info and they will tell you what is good for you!

Excellent blog very nice and unique information related to Drug. Thanks for sharing this information

I enjoyed reading this article on prescription meds……..very informative