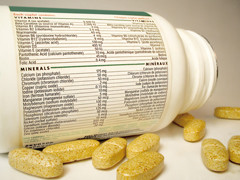 Americans’ love affair with vitamins—more than half of us take one a day—isn’t well supported by science. Trials of single vitamins, like E, C, and beta carotene, have been a bust. Whether multivitamins offer any health benefits has been something of a mystery.

Both a state of the science conference sponsored by the National Institutes of Health in 2006 and the 2010 Dietary Guidelines for Americans concluded that there wasn’t enough evidence to recommend for or against the use of any vitamins, including multivitamins, to prevent heart disease, cancer, and other chronic conditions.

That may be changing for multivitamins. A new report indicates that taking a standard multivitamin-multimineral pill every day for more than a decade reduces the odds of developing cancer.

The finding comes from the Physicians’ Health Study II, a Harvard-based trial begun in 1997. Nearly 15,000 male physicians aged 50 years and older took a daily pill containing 31 vitamins and minerals (Centrum Silver) or a placebo. No one, including the investigators, knew who was taking what until the trial ended.

Over the course of the trial, 1,379 men in the placebo group developed some form of cancer (18.3 cancers per 1,000 men per year), compared to 1,290 men in the multivitamin group (17.0 cancers per 1,000 men per year). That represents an 8% reduction in cancer. Rates of prostate cancer were the same in both the multivitamin and placebo groups. Deaths were also similar in both groups. The findings were presented today at the annual American Association for Cancer Research Frontiers in Cancer Prevention Research meeting in Anaheim CA and published online by the Journal of the American Medical Association.

“This modest reduction could be the result of addressing micronutrient deficiencies,” said Howard D. Sesso, co-principal investigator of the study and an associate professor of medicine at Harvard Medical School. “It is also possible that low doses of several vitamins and minerals might work together in other ways to prevent cancer.”

The effect of multivitamin-multimineral use on heart disease will be published in early November, with papers on eye disease (cataract and macular degeneration) and cognitive function to follow.

One a day for you?

A handful of observational studies have looked at possible connections between multivitamin use and cancer. (Observational studies follow large groups of people living their lives as they choose, and look for links between diet, exercise, or other factors and health.) Some indicated less cancer with multivitamin use, others showed little or no effect. The results from the Physicians’ Health Study II nudge the evidence in the benefit direction for a standard multivitamin-multimineral.

They don’t provide a slam dunk, though. For one thing, almost all of the participants were white men with excellent access to health care. They were also fairly healthy—under 4% were smokers, and many followed healthy diets. It’s possible that vitamins and minerals could have a smaller—or larger—anticancer effect in women, other ethnic or racial groups, and people who aren’t as healthy.

“Although our results indicate that taking a daily multivitamin may be one strategy for helping prevent cancer, they must be viewed in light of other evidence, past and future,” said lead author Dr. J. Michael Gaziano, a cardiologist at Harvard-affiliated Brigham and Women’s Hospital and VA Boston Healthcare.

Should you take a multivitamin-multimineral supplement? It can certainly provide some nutritional insurance, explained Dr. Eric Rimm, associate professor of nutrition and epidemiology at the Harvard School of Public Health. But it can’t substitute for vegetables, fruits, whole grains, and other healthful foods. “Foods have flavonoids, carotenoids, and many other substances that likely work to prevent cancer that multivitamins just don’t contain,” he said.

Thank you for sharing an excellent article highlighting the possible advantages of taking multivitamins, the questions remain if vitamins are delivered in the necessary dosages for optimum health and are the vegetables assumed to be organic. The whole reason for taking vitamins is supposed to be to supplement the deficiencies in our soils and to deliver much needed trace elements, if I’m not mistaken. I would welcome much further studies in this area as I believe that many people are unsure as to the real benefits of much of what they eat. Thanks a lot

A very basic thing that took too long to understand. Deficiency of vitamins and minerals causes millions of death all around the globe. Now that’s what I call cancer.

I’m sorry but this article isn’t useful whatsoever. Plus, you say ‘May help protect’. Why write this then? This is an old prescription that no longer works unless the person has a great diet, not good, great. I’d like to see you cover what people should eat and drink to keep them from getting cancer or disease such as a no fructose, low sugar diebt, no fast food or processed foods. For example, over 600,000 consumer food products people eat every day are made with GMO’s. If this country knew what they were actually eating, they would need more than a vitamin. Thank you.

I think depending on the medicines for sake of proteins and vitamins is not a good idea, it may lead to some side effects, so always prefer to take natural food which serves for best nutrients.

II have a scar on my right cheek from a large mole removed when I was three years old. It was itchy and the bumpy red part bled when scratched. Turns out it was Basal Cell Carcinoma.

Thank you so much for all of the thought and effort that has gone into making this an excellent publication. It is a real contribution to preventive medicine.

helpful information,im nutritionist and interest about this topic,i’ll extend this study in my country (Indonesia). hopely could solve our problem. thx

I am really very interested in such researches of helping me getting knowledge of how I can protect my self from dangerous diseases , thank you very much HARVARD MEDICAL SCHOOL .

I love this information is very helpful

With so much contraversies on the topics above such a timely publications.
Useful and educational.

Perfect and so useful