Astounding increase in antidepressant use by Americans 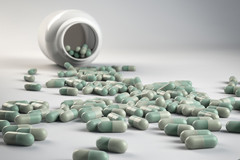 Remember when the best-selling book Listening to Prozac came out almost 20 years ago?

Now Americans aren’t just reading about Prozac. They are taking it and other antidepressants (Celexa, Effexor, Paxil, Zoloft, to name just a few) in astounding numbers.

According to a report released yesterday by the National Center for Health Statistics (NCHS), the rate of antidepressant use in this country among teens and adults (people ages 12 and older) increased by almost 400% between 1988–1994 and 2005–2008.

The federal government’s health statisticians figure that about one in every 10 Americans takes an antidepressant. And by their reckoning, antidepressants were the third most common prescription medication taken by Americans in 2005–2008, the latest period during which the National Health and Nutrition Examination Survey (NHANES) collected data on prescription drug use.

Here are a few other stand-out statistics from the report on antidepressants:

So is it a good thing that so many more Americans are taking antidepressants? Many (perhaps most) mental health professionals would say, yes, because depression has been undertreated and because antidepressants are effective.

But there are also plenty of critics, as shown by this review in the New York Review of Books, who say the benefits have been overstated and that pharmaceutical company marketing is responsible for the surge in prescriptions.

Of course there’s a middle ground that combines—some might say muddles—these two points of view: depression was neglected and sometimes antidepressants are the remedy, but there is some overuse and has been a major factor in the 400% increase.

What do you think? Has an antidepressant worked for you? Have the benefits been exaggerated and the side effects downplayed?