Antibiotics instead of surgery safe for some with appendicitis 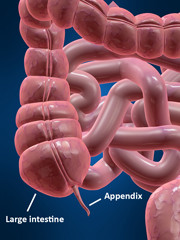 Since the late 1800s, doctors have turned to surgery to treat appendicitis, even though an inflamed appendix sometimes gets better on its own. A new report suggests that trying intravenous antibiotics first works as well as surgery for some people.

The appendix is a small pouch that hangs off the large intestine. It usually sits in the lower abdomen just above the right hip bone. No one really knows what the appendix does, if anything. It may be a holdover from our evolutionary past. It may also harbor beneficial bacteria, or be involved in fetal development or the immune system.

No matter what its role, the appendix can become inflamed. This condition, known as appendicitis, is one of the most common causes of severe abdominal pain. If an inflamed appendix breaks open and spills bacteria into the abdomen, it can trigger peritonitis, a potentially dangerous infection of the tissue that lines the inner wall of the abdomen and covers most of the abdominal organs.

Removing an inflamed appendix is one way to make sure it won’t cause peritonitis—or any future problems, for that matter. Thanks to laparoscopic (“keyhole”) surgery, removing an appendix is a relatively simple procedure.

Doctors have known for years, and CT scans have proved, that appendicitis often doesn’t lead to a burst appendix. Some physicians have used antibiotics as an alternative to immediate surgery when appendicitis is uncomplicated, meaning the appendix is swollen but hasn’t burst.

To see how well this works, researchers from Nottingham University Hospitals in England compiled the results of four randomized clinical trials that compared antibiotics and surgery for uncomplicated appendicitis. Here’s what they found:

The work was published in the British Medical Journal (BMJ).

Not a game changer

The authors concluded that administering antibiotics early “merits consideration as the initial treatment option for uncomplicated appendicitis.” But their work isn’t likely to immediately change the way appendicitis is treated in the United States.

For one thing, researchers would need to find simple, solid ways to identify who would—and who wouldn’t—be candidates for antibiotic therapy.

“Antibiotics first certainly wouldn’t be a one-size-fits-all approach,” said Dr. Andrew L. Warshaw, surgeon-in-chief emeritus at Massachusetts General Hospital and professor of surgery at Harvard Medical School. For older people, those with other health problems, and those at high risk for developing peritonitis, surgery first may be a safer option.

It would also be important to tally up the total costs of giving antibiotics and performing surgery, including the cost of treating complications and the cost of rehospitalization.

For now, most doctors will probably continue to recommend surgery to treat an inflamed appendix. But if you find yourself with appendicitis and your doctor suggests trying antibiotics first, he or she isn’t crazy and it just might work.

well…
i guess that you right about that…
9 time of 10 i will prefer Antibiotics instead of a surgery, that’s for sure!!
thanks for sharing!
nice post !

this is a good news. now people who’ve got appendicitis can be more relieve because there’s an alternative way to treat appendicitis by antibiotics usage. if there’re some people who fear to surgery, it’s a good choice to try treating their appendicitis.