Angina pain is similar in men and women, though descriptions may differ 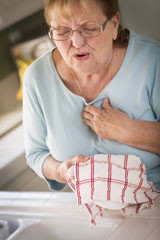 Chest pain brought on by exercise or stress, a condition known as angina, holds back millions of Americans from living life to the fullest. There’s long been a perception that angina symptoms in women are different than they are in men. That comes in part from the words used to describe these symptoms. Men tend to describe angina as “chest pain” while women use words like “heaviness” to explain what they are feeling. Those descriptions sometimes translate into different diagnoses.

Angina occurs when an artery that nourishes part of the heart, a coronary artery, becomes clogged with cholesterol-filled plaque. Most of the time enough blood flows past the plaque. But when the heart needs to work harder, say when climbing a flight of stairs, the plaque prevents extra blood from reaching that section of the heart.

Doctors often use the term “typical angina” to describe the angina symptoms that men relate. Symptoms more commonly described by women have been dubbed “atypical angina”—suggesting that women are somehow experiencing an unusual manifestation of heart trouble.

The use of different terminology only adds to the mistaken perception that coronary heart disease is a man’s disease, says Dr. Catherine Kreatsoulas, a heart and stroke research fellow at the Harvard School of Public Health. “By the time they’re age 70, men and women have equal rates of heart disease,” she says. “And then women surpass men.”

To explore gender differences in angina symptoms, Dr. Kreatsoulas and her colleague looked at the terms that men and women use to describe angina pain. Both women and men in the study used terms like “chest pain,” “pressure,” and “tightness.” It wasn’t that women experienced different symptoms than men. Instead, they sometimes used different language to describe the same symptoms.

When women used terms like “pressing” or “crushing” instead of the more straightforward “chest pain,” it was because “they wanted to give the doctor a deeper understanding of the type of chest pain they had. They were very explicit and very descriptive in their language,” Dr. Kreatsoulas says. But, she adds, many women “are really exhibiting typical angina symptoms.”

This work, published online this week in JAMA Internal Medicine, brings up a very important point, says Dr. Paula Johnson, associate professor of medicine at Harvard Medical School and chief of the Division of Women’s Health at Brigham and Women’s Hospital. “People may describe similar symptoms in different ways, and we [doctors] have to be competent in our ability to hear patients and understand the language they use.”

It’s important to keep in mind that this was a small study, cautions Dr. Johnson. To prove definitively that women’s symptoms are no different than men’s would require a much larger study. Also, Dr. Kreatsoulas and her colleagues looked only at one type of coronary artery disease—the kind caused by plaque obstructing blood flow to part of the heart. Women are actually more likely to have non-obstructive coronary heart disease—heart disease that occurs with little or no plaque visible in the arteries. To diagnose women accurately “requires understanding the range of symptoms, and also understanding what the disease may look like in women,” says Dr. Johnson.

Although men and women generally have the same angina symptoms, there are no absolutes. In addition to the more common chest pain, pressure, tightness, and heaviness, there are less common signs that may signal angina. These include:

By any name or description, chest discomfort is crucial for women—and their doctors—to pay attention to. Dr. Kreatsoulas says she hopes her research will help undo the gender bias that currently exists in diagnosing angina. “We want to abolish the term ‘atypical angina,'” she says. And that means acknowledging the possibility of angina no matter how a women describes suspicious chest-related symptoms.