The health benefits of tai chi

This gentle form of exercise can help maintain strength, flexibility, and balance, and could be the perfect activity for the rest of your life.

Tai chi is often described as "meditation in motion," but it might well be called "medication in motion." There is growing evidence that this mind-body practice, which originated in China as a martial art, has value in treating or preventing many health problems. And you can get started even if you aren't in top shape or the best of health.

In this low-impact, slow-motion exercise, you go without pausing through a series of motions named for animal actions — for example, "white crane spreads its wings" — or martial arts moves, such as "box both ears." As you move, you breathe deeply and naturally, focusing your attention — as in some kinds of meditation — on your bodily sensations. Tai chi differs from other types of exercise in several respects. The movements are usually circular and never forced, the muscles are relaxed rather than tensed, the joints are not fully extended or bent, and connective tissues are not stretched. Tai chi can be easily adapted for anyone, from the most fit to people confined to wheelchairs or recovering from surgery.

A growing body of carefully conducted research is building a compelling case for tai chi as an adjunct to standard medical treatment for the prevention and rehabilitation of many conditions commonly associated with age. An adjunct therapy is one that's used together with primary medical treatments, either to address a disease itself or its primary symptoms, or, more generally, to improve a patient's functioning and quality of life.

Warm-up. Easy motions, such as shoulder circles, turning the head from side to side, or rocking back and forth, help you to loosen your muscles and joints and focus on your breath and body.

Instruction and practice of tai chi forms. Short forms — forms are sets of movements — may include a dozen or fewer movements; long forms may include hundreds. Different styles require smaller or larger movements. A short form with smaller, slower movements is usually recommended at the beginning, especially if you're older or not in good condition.

Qigong (or chi kung). Translated as "breath work" or "energy work," this consists of a few minutes of gentle breathing sometimes combined with movement. The idea is to help relax the mind and mobilize the body's energy. Qigong may be practiced standing, sitting, or lying down.

Although tai chi is slow and gentle and doesn't leave you breathless, it addresses the key components of fitness — muscle strength, flexibility, balance, and, to a lesser degree, aerobic conditioning. Here's some of the evidence:

Although you aren't working with weights or resistance bands, the unsupported arm exercise involved in tai chi strengthens your upper body. Tai chi strengthens both the lower and upper extremities and also the core muscles of the back and abdomen.

Flexibility. Tai chi can boost upper- and lower-body flexibility as well as strength.

Balance. Tai chi improves balance and, according to some studies, reduces falls. Proprioception — the ability to sense the position of one's body in space — declines with age. Tai chi helps train this sense, which is a function of sensory neurons in the inner ear and stretch receptors in the muscles and ligaments. Tai chi also improves muscle strength and flexibility, which makes it easier to recover from a stumble. Fear of falling can make you more likely to fall; some studies have found that tai chi training helps reduce that fear.

Aerobic conditioning. Depending on the speed and size of the movements, tai chi can provide some aerobic benefits. If your clinician advises a more intense cardio workout with a higher heart rate than tai chi can offer, you may need something more aerobic as well. 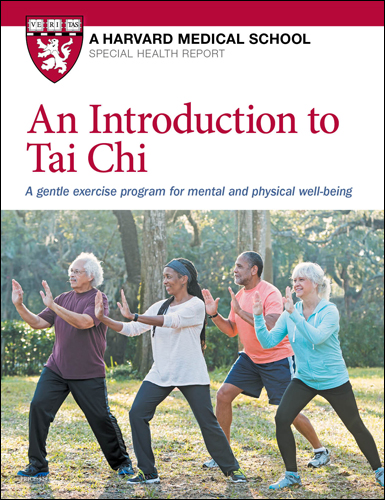 An Introduction to Tai Chi

Mind-body exercises, such as tai chi and yoga, have been gaining popularity over the past few decades. This is not surprising, given the increasing number of studies on the positive effects of these gentler forms of exercise—everything from lowering blood pressure and managing depression to building strength and improving balance. There is even evidence that tai chi may help you live a longer, more vital life.