The facts about glaucoma 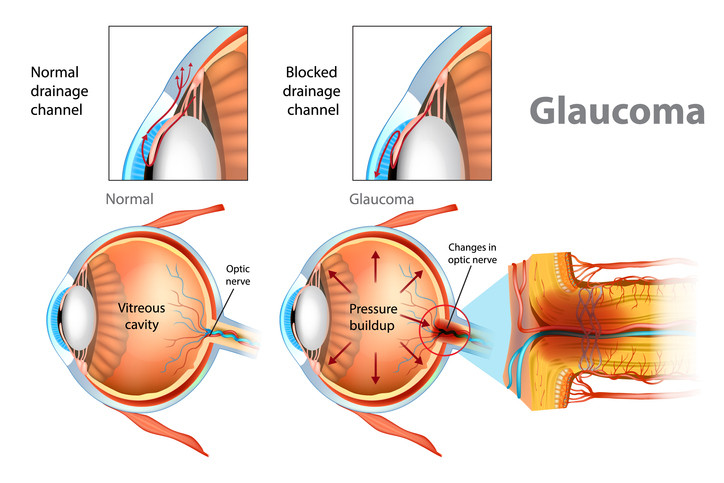 Glaucoma is an eye disease which involves damage to the optic nerve, sometimes resulting in permanent vision loss. It is one of the leading causes of blindness in adults over age 60. Most of often glaucoma is associated with pressure build up inside the eye.

Normally, a fluid called the aqueous humor flows around the eye. It's made up mostly of water, plus a small amount of nutrients to nourish the cornea and lens. After bathing the eye, this fluid drains through an area called the trabecular meshwork in the corner where the cornea and iris meet.

In glaucoma, either too much fluid is produced or it doesn't drain efficiently. The fluid builds up and causes pressure to rise inside the eye, which leads to optic nerve damage.

The following factors increase the risk for glaucoma:

Often, no symptoms appear until the optic nerve has been significantly damaged. That's why this disease is often called a "silent thief of sight." In its later stages, glaucoma causes blind spots to appear in the peripheral (side) and central vision.

Angle-closure glaucoma comes on suddenly, with symptoms like these:

Anyone who experiences these symptoms should see an eye doctor right away.

Ophthalmologists test for glaucoma during a comprehensive eye exam. The American Academy of Ophthalmology recommends this exam every one to two years for people who are age 65 and older. African Americans and those with a family history of glaucoma should start getting checked for glaucoma as early as age 40.

Before the exam, the doctor may use eye drops to dilate (widen) and/or numb the pupils. Dilating the pupil allows more light into the eye and makes it easier for the ophthalmologist to see.

The following tests may be part of the eye exam:

It's important to get treated early, because eye damage from glaucoma is irreversible. The choice of therapy is based on the type of glaucoma, and can include medicated eye drops, laser treatment, and surgery.

Eye drops work in one of two ways to lower eye pressure. Some drops help fluid drain more easily from the eye:

Other drops work by reducing the amount of fluid the eye makes:

Possible side effects of these medications include:

Laser surgery creates an opening for the fluid to drain from the eye. Which procedure is performed depends on the type of glaucoma:

The effects of surgery may not become apparent for four to six weeks, and not everyone will see improvement. Surgery can also cause side effects like dryness, swelling, or soreness.

If medicine and laser surgery don't work or they aren't an option for open-angle glaucoma, doctors can perform open surgery to create a new channel for the aqueous humor to drain.

Trabeculectomy cuts a tiny opening in the sclera – the white part of the eye – under the eyelid where it isn't visible. The surgeon also creates a tiny bubble called a bleb in the clear part in front of the sclera – the conjunctiva. Fluid then drains out of the eye through the flap and into the bleb.