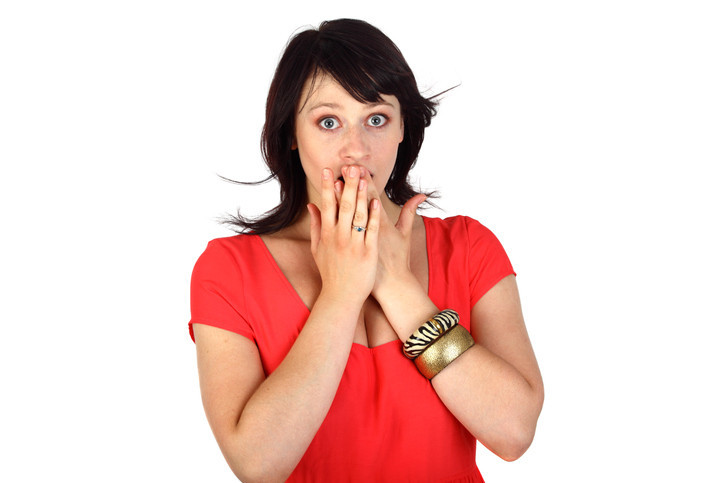 Strange cures create a stimulus that interrupts the reflex.

Several bodily functions can be played for laughs, and hiccups are one of them. Hiccups are usually minor and short-lived, if a little embarrassing and inconvenient. But they're often associated with good times — a bit of overeating, perhaps, or getting tipsy. The sound itself is funny.

Some of the remedies are amusing, too: drinking from the wrong side of the glass, having someone jump out at you and shout "boo," biting a lemon, and drinking pickle juice, to name a few. "It is good to cast colde water in the face of him that hath the hicket," was the advice in 16th-century England. There are also standbys like holding your breath or breathing into a paper bag. Some of these cures make more sense than others, but they're all pretty much untested.

Sometimes nothing works. Hiccups can go on for a long time. According to the Guinness Book of World Records, an Iowa resident named Charles Osborne had the hiccups for 68 years. But even a few days' worth can be distressing. And if hiccups go on longer, they can cause serious problems, including difficulty eating, dehydration, depression, and loss of sleep (although it's also possible to hiccup while you sleep).

Persistent hiccups can be related to an underlying medical condition. Tumors can impinge on nerves in the chest or abdomen. Hiccups can be a symptom of diseases that affect the central nervous system (the brain and spinal cord), such as multiple sclerosis or strokes.

What is going on when you hiccup?

A hiccup begins as if you're taking a big breath of air much faster than normal. Your diaphragm contracts and pulls down, and your chest muscles go to work. A fraction of a second later (precisely 35 milliseconds, according to one classic study), the narrow opening between the vocal cords snaps shut — and you hear the distinctive hiccup sound. It's unclear whether the voice box (glottis) is pulled shut or if it closes because of negative pressure from expansion of the chest.

Nobody is completely sure how the hiccup reflex is triggered, and the cause may differ in different people. But a common explanation is that it starts with irritation or stimulation of the phrenic or vagus nerves, and perhaps other nerves in the autonomic nervous system. The phrenic nerve leads from the brain to the diaphragm. Vagus is Latin for wandering, and the vagus nerve does seem to wander, traveling from the brain to the ear, throat, and many parts of the chest and abdomen.

The involvement of the vagus nerve may explain why hiccups can start for so many different, and sometimes odd, reasons. Doctors in Italy have reported that two men could provoke hiccups by stroking or shaving their beards. In another case, the source was a hair tickling the eardrum.

After nerves are stimulated, the message is sent to the medulla oblongata, an area of the lower brain involved in regulating breathing and other basic functions. Some researchers have suggested that this region contains a "hiccup" center entirely separate from any control of breathing. After passing through the medulla oblongata, the "hiccup message" gets sent down the phrenic nerve to the diaphragm.

Several factors can trigger the short bouts of hiccups that many people periodically experience:

Many of the remedies for mild hiccups may work by creating a stimulus that interrupts the signals causing the reflex. In effect, you take the nervous system out of its rut. So, for example, when you drink from the wrong side of the glass, you may be exciting nerves in the back of the mouth, nose, and throat that aren't stimulated by normal drinking. The throat (pharynx) seems to be a hot spot for generating these interrupting messages, which explains why so many cures involve unusual drinking or eating.

Breathing into a paper bag works a different way. It increases the carbon dioxide (CO2) level in your blood, and it's been shown that as CO2 levels go up, hiccups tend to recede.

A maneuver called "supra-supramaximal inspiration" was described in the Journal of Emergency Medicine many years ago. You exhale and then take a very deep breath and hold it for 10 seconds. Then, without exhaling, you breathe in again, pause, and then breathe in a third time. The doctors theorize that stacking three inhalations in a row stops hiccups both by increasing CO2 levels in the blood and by immobilizing the diaphragm.

The most commonly prescribed medicine for hiccups, and the only one approved by the FDA, is chlorpromazine (Thorazine). Often, drugs approved to treat one condition prove useful in treating another. That's the case with chlorpromazine, which was first approved as a drug to treat psychotic disorders. It can also treat hiccups, either in pill form or — in severe cases — intravenously.

Small studies suggest that several other drugs also may work, including baclofen, metoclopramide, phenytoin, valproic acid, and gabapentin, although the FDA has not approved their use to treat hiccups. Other small studies suggest that marijuana, acupuncture, or hypnosis may help. Although surgical approaches have been developed, they are a last resort, reserved for the rare cases that last, literally, for years.